Have you heard about the conspiracy group called 'QAnon'? If not yet, better check your social media now. This controversial pro-Trump group has been all over most giant social media platforms. If you search the word 'QAnon,' a lot of pages or groups refer to the group. So, how did it happen without us knowing? And who is the 'Q'?

Learning who the 'Q' is

(Photo : REUTERS/Stephanie Keith)
A person wearing a t-shirt supportive of QAnon participates in a "Back the Blue" rally in the Brooklyn borough of New York City, New York, U.S. August 9, 2020. Picture taken August 9, 2020.

If you're unfamiliar with the subject 'QAnon', check your social media and you will know exactly what it is. That is how the group is now infiltrating most social media platforms today.

'QAnon' is now back on the headlines when Georgia's Republican candidate Marjorie Taylor Greene won against her fellow Republican John Cowan. It turns out, Greene is a current supporter of the controversial conspiracy group.

In 2017, Greene patronizes the group calling it "something worth listening to and paying attention to."

When asked during a debate if she was a member of the QAnon group, she simply said, "I am committed to my allegiance to the United States of America. I, like many Americans, am disgusted with the Deep State who has launched an effort to get rid of President Trump. Yes, I'm against all of those things and I will work hard against those issues."

'QAnon' whose members are called the 'Q,' is a 'conspiracy cult' that claims numbers of famous politicians and celebrities work together to start a global 'child trafficking abuse.' These alleged people are called 'deep state.'

Aside from the human trafficking crime, these personalities were also said to be targeting the United States President Donald Trump and his supporters.

How 'QAnon' is all over social media 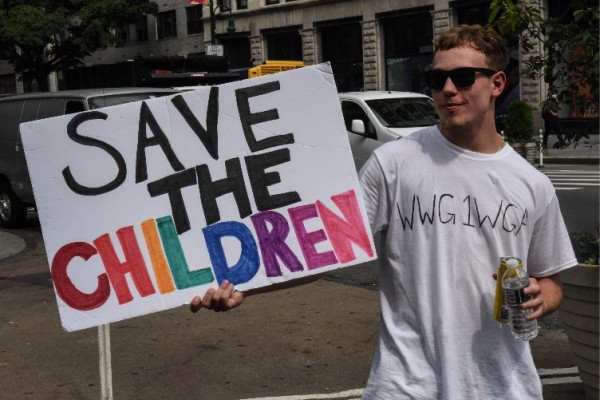 (Photo : REUTERS/Stephanie Keith)
A person wears a t-shirt with the anagram WWG1WGA, the QAnon slogan, while participating in a "save the children" march and rally in New York City, New York, U.S. August 12, 2020

On Aug. 7, Tech Times reported that Facebook recently wiped away the biggest 'QAnon' group on the platform, with 200,000 members.

The group called 'Official Q/QAnon' was removed as the group was said to be posting several speculations and conspiracies about different personalities.

It was said that after the group removal, the members of the 'QAnon' quickly dissolved. However, as Tech Times looked on the platform, several pages named 'We Are Q' are still active with likes of over 60,000 members.

We’ve been clear that we will take strong enforcement action on behavior that has the potential to lead to offline harm. In line with this approach, this week we are taking further action on so-called ‘QAnon’ activity across the service. — Twitter Safety (@TwitterSafety) July 22, 2020

Not so surprisingly, Reddit also became home of QAnon supporters for quite some time. It was revealed on its official MOD support chat that Reddit was hacked by unknown sources to become breeding ground of the group.

Nearly 100 subreddits were reportedly infiltrated by QAnon communities. The threat actors allegedly posted references to "We Stand With Donald Trump #MIGA2020"-- which is the common catchphrase of the group.

What is your opinion about 'QAnon'?

ALSO READ: Wonder Why #SaveTheChildren Was Blocked on Facebook? Check out This Altered Photo of Tom Hanks