Animal Crossing: New Horizons: Here Are Some Tips to Create a Naruto Island

Animal Crossing: New Horizons just came with a treat for anime lovers as players can design their islands inspired by Naruto. Here are some tips on how to customize your island.

Animal Crossing: New Horizons allows players to personalize their islands, homes, and even characters and the design portal and pattern tool. Here they can create and share their islands with others. There are even communities based on fandoms like superheroes, Disney, and Star Wars. Recently, Animal Crossing something from Japan with manga, Japanese animation, anime, and graphic novels. 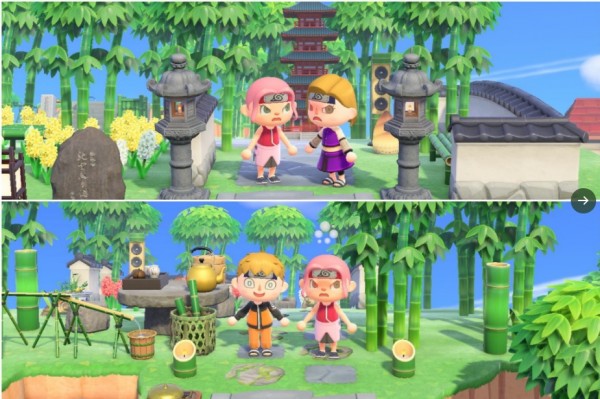 This is great news for those who have always fantasized about bringing their favorite anime characters-for one, having aspects of the island-inspired by Naruto, one of the more famous anime characters in North America. They can find some Asian-inspired items in the design portal to create a unique island experience based on Naruto's adventures. Here is some Animal Crossing: New Horizons design ideas to kickstart your ninja-inspired island.

Since designing landscapes based on the Naruto series may be difficult, most players play with the characters they put on their New Horizons islands instead. They begin with customizing their clothing designs instead of accessing the Custom Design Portal. 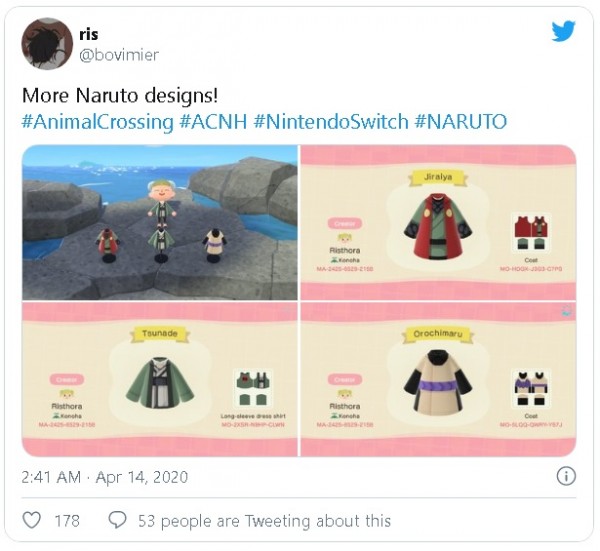 There are hundreds of available codes for custom Naruto designs, including costumes from every character--from Young Naruto to Sage Naruto. There are also designs for the Sannin and Team Sasuke, which players can download from the community. If their preferred designs are not available, players can also design their own costumes.

However, since a limited number of outfits a character can wear, players can also send these clothing as gifts to their resident villagers, and a villager who likes the attire can wear it around the island. Giving gifts is a good way to build camaraderie between villagers.

Here are some costumes created by Twitter user @ris. Check them out to draw some inspirations. 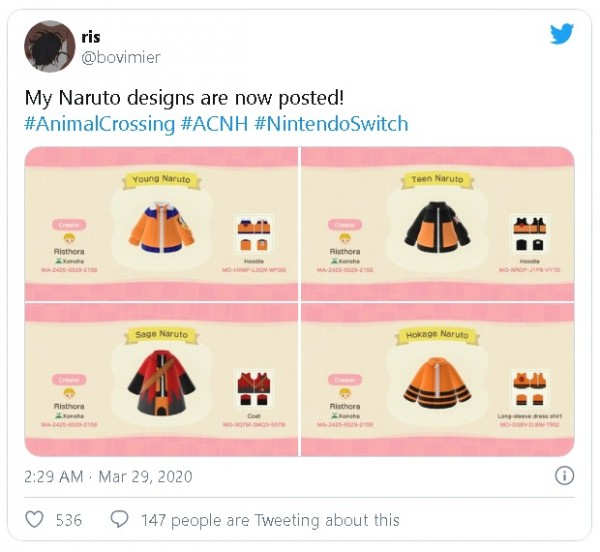 Read also: Animal Crossing: New Horizons Stylish Makeover and Is It Possible to Play it On PC

Here are great items that may fit a Naruto design. Players can mix and match the items to suit their taste.

Players just need to play with their imagination and be creative when using each item, although they must be careful as well not to go overboard.

Players can also use Terraforming in creating anime or manga designs. However, they must have a five-star Animal Crossing: New Horizons island to unlock Terraforming tools to redesign their island completely. They will indeed have infinite inspiration and models from the community.

To recreate some of their favorite locations from the Naruto show, players can start with the Ninja Temples. They can start by making a waterfall and adding some Redd's fake statues to create the End's Valley.

They can also make an outdoor version of the famous ramen restaurant from the show, Ramen Ichiraku. Meanwhile, players may also opt to reconstruct The Academy, where prospective Ninjas are trained. They can do it by redesigning their home or the villagers' homes.