An inspiring TikTok influencer from Edmonton, Canada, uses his platform to raise awareness and educate people about the indigenous culture to his 1 million followers in the short video sharing application.

James Jones is a TikTok content creator (@notoriuscree) who has 1 million followers in the video-sharing social media networking app. Jones rose to fame as he proudly shares his roots as a Native American and aims to teach people about the culture to raise awareness on the application. 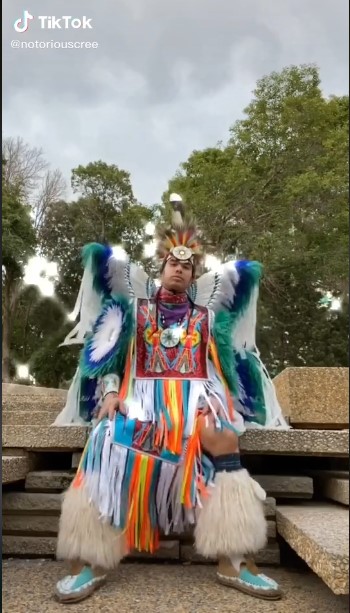 Jones came from the Cree Native American line from the Nehiyaw Tribe, according to his TikTok Video. In this video, he proudly showcases his roots as a Cree native, asking people which tribe they hail from, and empowers indigenous presence in the social media.

Global News Canada reports that Jones has been using the application since March and rose to fame with his sensational content that moves away from the popular culture that the application is famous for.

Jones first posted comedic videos on TikTok that did not gain much attention from the public. With this, he switched to producing dance videos because of his interest and designation as a dancer. When his first indigenous dance video was posted, James Jones recounts that it blew up to a staggering 3 million views.

Since his TikTok debut on March, Native American, Jones, has posted numerous videos that all revolved around his culture as part of the great ancestors of the country. His first video is a comedic take on the Bottle Cap challenge using his long hair and braids to spin around and let his hair fly and flick the cap away from the body.

Jones' first post reached 148,700 views and since then, he regularly posted in the application. James Jones' videos are vocal about his culture and ancestry of being a Native American and promotes knowledge and awareness. James Jones is from the Tallcree First Nation tribe, and proudly sports a long hair which he braids as a way to honor his ancestors.

Representation in the Media

Apart from Jones campaigning and raising awareness in TikTok for several months now, his actions and efforts to showcase indigenuity is a part of adequately representing Native Americans and the indigenous people in the mainstream media. According to Jones, non-Indigenous people are recounting their stories and culture in popular media. He said that it is about time that there is cultural appropriation through his works and content.

@notoriouscree Thank you all so much for the 1 million all the support means so much to me. More videos coming today. This is my happy dance. @sheafreak4jb1 ♬ Not The Thermometer Slow Version - _.editedsounds

For more than six months, Notorious Cree has been posting content that all relate to his culture as a Native American, and it has contributed to being an informative source of information doubling also as a source of entertainment for TikTok's audience.

James Jones said that the application had helped a lot in the empowerment of his culture based on his experience. TikTok allowed Jones to appropriately tell his story and showcase his roots as a Native American, gaining positive responses. Jones' content was more noticeable and "at-home" on TikTok unlike any other streaming platforms available.

Jones gains pleasure from the comments that people say about his content giving co-Native American descent knowledge they never knew before. His content proves that it can empower not only other watchers but also those of the same culture that has little-to-no knowledge about their roots.

James Jones also praises TikTok for providing a platform for people-of-color such as himself and a handful of influencers in the application.