NASA is tracking a huge asteroid that is set to collide with the Earth's orbit on September 6.

The Near-Earth Object (NEO) is almost twice the size of the Great Pyramid of Giza at about 270m wide and flies at 31,400mph towards the Earth.

(Photo : Minor Planet Center)
This sketch illustrates the object's approximate orbit for the epoch given.

Fortunately, the Center for Near-Earth Object Studies (CNEOS) scientists said the asteroid is not a threat to human life. A NEO is an astronomical object that flies at 1.3 astronomical units (AU), which is the average distance between the Sun and the Earth.

Currently, NASA is tracking around 2,000 asteroids and comets, which are 90% of rocks that can be a threat to the Earth. These asteroids usually measures 460 feet in diameter and can easily be spotted.

The closest flyby of a car-size rock

On August 16, NASA has recorded the closest flyby to the Earth by a car-size asteroid, which happened above the Indian Ocean at 1,830 miles far from the planet.

"It's really cool to see a small asteroid come by this close, because we can see the Earth's gravity dramatically bend its trajectory," said CNEOS Director Paul Chodas adding that their calculations show that the rock asteroid even turned by about 45 degrees as it passed by the Earth. 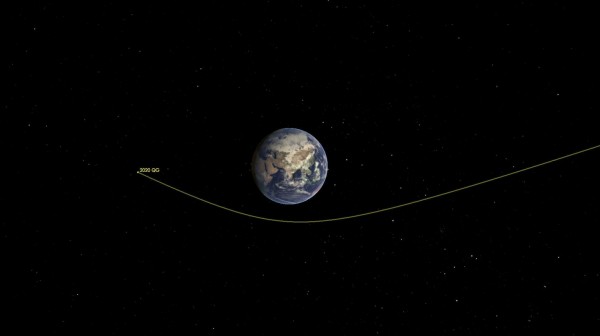 (Photo : NASA/JPL-Caltech)
This illustration shows asteroid 2020 QG's trajectory bending during its close approach to Earth. The asteroid is the closest known non-impacting asteroid ever detected. The asteroid passed by 1,830 miles (2,945 kilometers) above the southern Indian Ocean on Sunday, Aug. 16 at 12:08 a.m. EDT (Saturday, Aug. 15 at 9:08 p.m. PDT).

While NASA admitted it did not see the space rock coming, the Zwicky Transient Facility was able to take a wide-field camera image of the 2020 QG as it was heading away from Earth, six hours after the closest point of approach.  "We didn't see it coming," Dr. Chodas told Business Insider.  Nevertheless, the director noted that it is still "quite an accomplishment" to observe tiny close-in asteroids, which quickly pass by.

Based on the image, QG's size lies between 6 feet (2 meters) and 18 feet (5.5 meters) wide with speed at about 27,000 mph, which is nearer than the distance between Los Angeles and New York City. It also flew more than 130 times closer than the Moon to the Earth at 230,000 miles. Despite the close distance, the rock did not pose a threat to the planet.

For October, the agency is also expecting 10 asteroids to flyby between October 1 and October 29. Hopefully, none of these rocks will pose a threat to the Earth.

ⓒ 2021 TECHTIMES.com All rights reserved. Do not reproduce without permission.
Tags: NASA Asteroid Great Pyramid of Giza
Most Popular