Cobra Kai is Netflix's #1 Streamed Series Since its Release!—What Makes the 80s Karate Homage So Special?

Steaming and media conglomerate Netflix finally carries out the most awaited series in its roster with Cobra Kai, which premiered its first episode on YouTube in 2018. The sequel finds an all-new success with its first two seasons, having an insane amount of followers and fans that stem from the current generation and the older ones who witnessed The Karate Kid movie franchise back then.

Hey Cobra Kai season 1 and 2 are on Netflix. This show was too good for Youtube Red pic.twitter.com/C0dgiDQjkp — Pan-Pizza (@RebelTaxi) August 29, 2020

Decades after the 1984 All Valley Karate Tournament, Cobra Kai features Johnny Lawrence back into the spotlight as an unsuccessful and angry person who projects his hatred into his attitude and the world. The series is light and fun, focusing its drama on the Californian town surrounded by the valleys.

Decider reports that Netflix ranks Cobra Kai in the number one spot this week, holding the place against the 2011 live adaptation movie and 1980s hit cartoon, The Smurfs, in the number two spot. Sister Sister, on the other hand, is the 1990s hit television situational comedy show that focuses on separated twins reuniting again, in third. 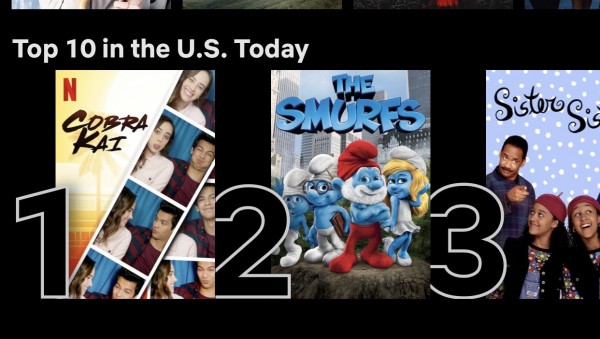 Cobra Kai and its Netflix Success

Netflix carries Cobra Kai in its streaming services. It is now widely available to fans who want to relieve the old and on-going rivalry of Daniel LaRusso and Johhny Lawrence that stems back into the first 'The Karate Kid' film in 1984. Cobra Kai gives a unique perspective and puts the 1984 film's main adversary to the teenage LaRusso, Johnny Lawrence. The series starts by narrating the happenings since the first film and shows how Johnny's life took a turn after losing the 1984 All Valley Karate Tournament.

One of the coolest parts about Cobra Kai is seeing what happened in The Karate Kid explained from Johnny's perspective pic.twitter.com/vQGvvt6mcv — Netflix (@netflix) September 3, 2020


Cobra Kai then follows Johnny Lawrence in his quest to reinstitute "badassery" into the world with Karate after witnessing bullies to prey on the weak with the series' new protege, Miguel Diaz, played by actor Xolo Maridueña.

Johnny Lawrence's character undergoes a string of development that aims to take him away from the villainous image he had in the 80s movie. The series still relieves the rivalry between Ralph Macchio's Daniel LaRusso and William Zabka's Johnny Lawrence with the various problems that the characters run throughout the show.

Netflix will now take the reigns for Cobra Kai, after acquiring its rights and produce the series' third season that will return in 2021.

Why is Daniel LaRusso Speculated by Fans to be the Villain in The Karate Kid Series?

Several speculations have questioned the position and image of 'The Karate Kid's main protagonist, Daniel LaRusso, to be the real bully in the first film. This theory originally made its way into a hit TV sitcom, How I Met Your Mother, with Barney Stinson favoring "Billy Zabka" and addressing him as the real Karate Kid. Vice reports these speculations to be unearthed in a couple of conspiracies that revolves around Ralph Macchio's character in the movie. Several testimonies even present Karate Master, Mr. Miyagi, to be the real hero in the film, and Daniel to only be an instrument to which he instills his knowledge and ways.

The more things change, well... you know the rest. We take this grudge to the @netflix dojo tomorrow. pic.twitter.com/Drhu1FOpgc — Cobra Kai (@CobraKaiSeries) August 28, 2020


Cobra Kai explores and sheds more light on this issue that shows the development of Johnny Lawrence's character and puts Daniel LaRusso on a somewhat unlikeable spot.