A month ago, on Aug. 5, Beirut was shocked by a massive explosion that happened in its port area. Today, panic ensues yet again as a new fire broke out in the same area that killed around 190 people, with about 20 people still missing, and left 6,000 more wounded. 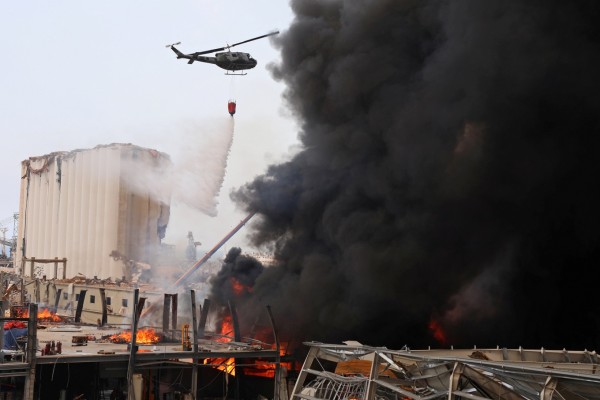 According to a report by News.com.au, the Beirut port fire started in a warehouse storing vehicle tires and engine oil, but the army is still uncertain what started the blaze in the first place.

The Beirut military updated the people via Twitter, saying that operations have begun extinguishing the fire, and army helicopters have already headed to the fire to help stop the fire.

Tons of citizens have begun taking photos and videos of the smoke, uploading them on social media, particularly Twitter, showing thick black smoke rising to the sky from the Beirut port, sending alarm throughout the Lebanon capital as well as people around the world.

"Insane fire at the port, causing a panic all across Beirut. We just can't catch a break," writes Aya Majzoub, a Human Rights Watch researcher, on her Twitter.

Insane fire at the port, causing a panic all across #Beirut. We just can’t catch a break. pic.twitter.com/PtdHehPlz0 — Aya Majzoub (@Aya_Majzoub) September 10, 2020

Sky News journalist Larissa Aoun shared several videos from the scene, writing on her own Twitter account what people might have been thinking during the time.

People must be thinking : should I run, should I hide , open windows , close windows, pack a bag , leave the area .. A new fire in the port area #Beirut #Lebanon pic.twitter.com/eZ9MVvtE0m — Larissa Aoun (@LarissaAounSky) September 10, 2020

"People must be thinking: should I run, should I hide, open windows, close windows, pack a bag, leave the area," Aoun writes.

Another video from the journalist shows employees at the port running away from the fire.

As of writing, there are no updates on whether the fire has taken any lives or injured any people, as well as other damages.

Weeks After the Beirut Blast

More than a month ago, the world was shocked when videos emerged from a massive blast in the Beirut port.

According to the reports, the fire started at a warehou storing more than 2,700 tonnes of ammonium nitrate and igniting the chemical compound, an explosion that was likened to the Hiroshima bombing from World War II.

Based on the news outlet, 25 suspects are already in custody after the Beirut blast that included top customs and port officials, as well as several Syrian workers who were allegedly carrying out the welding hours before the explosion happened.

Both the Beirut blast and the new port fire occurred amid the coronavirus pandemic.

With that, Lebanon has seen a dramatic increase of COVID-19 cases after the blast, according to a report by NPR, with cases rising 220% based on the assessment of the International Rescue Committee.

Lebanon was able to keep COVID-19 at bay and kept the infection rate low in the early days of the pandemic by quickly imposing strict stay-at-home measures.

Nevertheless, the country has been recording 500 to 600 cases almost every day since mid-August.

Unfortunately, three of Beirut's major hospitals had to be closed following the blast, and another three were partially damaged, with around 500 hospital beds lost due to the explosion, according to the World Health Organization.

This is on top of people losing both their homes and their source of income in an instant.