A controversial California-based doctor pulled out a 9mm pistol during an online interview as he claimed his gun could offer more protection against COVID-19 than face coverings.

Dr. Jeff Barke made his anti-mask statements in a video shared by Who's the BOS? - Orange County Board of Supervisors Facebook page on September 17. He was with Peggy Hall, a Wellness expert and holistic life coach who also against the use of face mask. 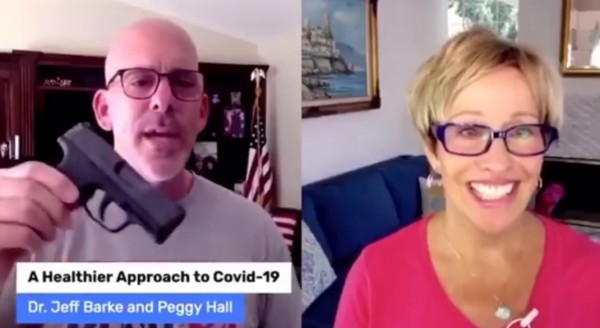 (Photo : Who's The Boss/Facebook)
Doctor Claims his 9-millimeter gun offers more protection against COVID-19 than facemasks

"What I do, Peggy, to protect you and to protect others when I'm in public - I think better than a mask - this is what I do," said Barke then pulled out his pistol. He then bragged that he is trained to use the firearm, which he carried everywhere he goes.

Barke lives in Orange County and he said he works as a reserve deputy ''with a local sheriff's department agency." He also added that he rather see a person who carries a concealed firearm than someone who wears a mask.

The Centers for Disease Control and Prevention has long recommended the use of face masks that is believed to protect people from getting coronavirus pat through the mouth and nose.

However, Dr. Barke's claims that his firearm can give more protection than face coverings shocked the Orange County community. One Facebook user commented on the video that she is confused on how the gun could offer protection against coronavirus. "So are we supposed to shoot the virus? Or do we shoot people who get closer than six feet so we don't get their germs? I'm so confused," Lisa Pinedo said.

Facebook user Ann Kinserlow Ortt said the duo is "a threat to my personal health" while Marti Simons said: "Wow. What a display of ignorance."

Hoag Hospital: Dr. Barke is not an employee

Meanwhile, Hoag Hospital, Orange County's highest ranked hospital in the U.S., released a statement on September 19 stating how officials were "deeply disturbed" by Barke's "radical views on COVID, masking and hydroxychloroquine," which go against with those acknowledged by scientific and medical organizations. The hospital also claims it is actively promoting CDC guidelines to protect the public against COVID-19.

"'His personal views in no way represent the views of Hoag or Hoag Medical Staff," the statement said adding that Barke is not an employee of Hoag Hospital and does not have admitting privileges in the facility.

As of September 24, Barke is still on listed as a physician who only hosts "outpatient-based privileges" in Hoag Hospital Newport Beach's website, but the hospital seemed to distance from the doctor after the video surfaced.

According to The Orange County Register, which first reported about the story, Barke declined to comment about the hospital's tweet.

Meanwhile, the Orange County Sheriff's Department told The OCR in an email that Barke is a level 3 volunteer reserve deputy and that the doctor had a permit to carry for concealed weapons. The sheriff department also found no criminal violations of Barke's actions in the video, but they are reviewing the footage to determine for any violations.