LOOK: Stunning Photo and Video of Rocket Flying in Front of the Moon Captured Using Simple Trick with Sony A6500 Camera

A Philadelphian photographer's fantasy of taking a photo of a rocket flying in front of the moon has finally come true. The image of the moon-transiting rocket is believed to be among the first ones taken in two decades.

It was taken on October 2 at 9:16 p.m. ET by Steven Rice during the NASA's resupply mission launch in the Northrop Grumman, an American aerospace and defense technology firm. The image was carefully composed as it caught the Antares rocket transiting in front of a nearly full moon as it flies towards the International Space Station (ISS). 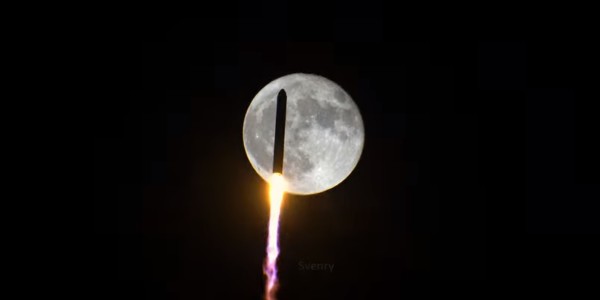 Rice shared in Instagram the stunning images, which were captured using a Sony A6500 with a vintage 60-300mm, ISO 400, f/8, and 1/320s. "I captured one of my dream shots during the NG-14 launch two nights ago. Moon & rocket (carrying a space toilet, no less)," said Rice as the space cargo includes the new toilet for the ISS.

He included eight more photos, which are equally spectacular as some of them show the superheated exhaust released from the rocket's twin RD-181 engines. The photographer also said that he took the photo about 22 seconds after liftoff as he was about 3.4 miles away from the site. "For reference, the Antares rocket is 139ft/42.5m long and 13ft/3.9m wide," he noted.

View this post on Instagram
I captured one of my dream shots during the NG-14 launch two nights ago. Moon & rocket (carrying a space toilet, no less). Swipe over for 8 more photos in the sequence and check out that superheated plume from the twin RD-181 engines. This occurred roughly 22 seconds after liftoff and was shot from a distance of 3.4 miles (5.5km). For reference, the Antares rocket is 139ft/42.5m long and 13ft/3.9m wide. . 2020.10.02, 9:16 PM Sony A6500, vintage 60-300mm, f/8, ISO 400, 1/320s. . Planning a shot like this can be pretty exhaust-ing, so an enthusiastic shoutout to @flightclubio for making it possible. . #NG14 #CRS14 #antares #cygnus #northropgrumman #nasa #wallopsflightfacility #midatlanticregionalspaceport #iss #spacestation #internationalspacestation @ISS @nasawallops #wallops #wallopsisland #rocketlaunch #rocket #a6500 #youresa #universetoday #ipulledoverforthis #moonawards #moonoftheday #silhouette #lunartransit A post shared by Steve (@svenry) on Oct 4, 2020 at 11:03am PDT

Professional photographers covering rocket launches were amazed by the Rice's photo and they believe it was among the perfectly timed images of moon-transiting rocket-launch taken within two decades.

The mission would carry about 5,000 pounds of food, water, air, spacesuit parts as well as the titanium space-toilet prototype that costs $23 million to the ISS.

Read also: Space Week 2020: How to Watch the ISS Fly Even Without a Telescope

Still in the wrong place

Rice told Business Insider that among his favorite subject is seeing the space station flying in front of the sun or the moon through his telescope. The image has long been in his mind as a fantasy because he does not "get too many launches" near his home. "So the thought of the rocket going across the moon has been on my mind. But I never thought there'd be an opportunity to do that," Rice added.

When Northrop Grumman announced it will fly NASA's Cygnus NG-14 cargo resupply mission, called as "S.S. Kalpana Chawla," the 33-year-old photographer took the chance to cover the launch. He is three and a half hour away from NASA's launch facility at Wallops Island, Virginia. The first attempt on October 1 was delayed 18 seconds before the scheduled liftoff due to a problem in the ground control equipment.

The Texan native who calls Philadelphia his home returned to the site. He was so committed to taking photos and video of a rocket ascending in front of the moon that he even researched shooting settings and alignments using specialized apps, studied weather forecasts, and checked on maps to locate the perfect spot.

He found it 3.4 miles from NASA's launch site: a shoulder of a road, which is near a cornfield. He calculated that the moon would be aligning perfectly with the moon on the background at around 22 seconds after liftoff.

However, 16 minutes on the countdown, he noticed he was a feet away from the sweet spot. "I used a map to count telephone poles from intersections, " he said, adding that it was hard to do so at night, so he first set up at a wrong telephone pole.

He moved to the correct location and pulled out his tripod and camera. He used a $20-300-millimeter telephoto lens that he bought on Ebay. He also erected a second tripod with a camera with attached small telescope to record a video.

Patiently, he held his camera's shutter down and used his "spray and pray" method while hoping he would get some great frames. Seconds later, the rocket flew across the moon, just where Rice hoped it would be.

The images he shared on his Instagram account where all stunning. "This was the only time I've actually shouted after getting the shot," said Rice adding that he was alone rejoicing on the road. He also uploaded the 4K ultra-high resolution video on YouTube , which even made him more excited.

The footage shows the dual rocket engines' shockwaves as they emanate into the air. The rocket plumes disturbed the moon's image. "It's like a mirage," Rice noted adding that he is amazed at how accurate and lucky he could be to get the alignment right.

Launch photographer Carleton Bailie said it could take about 20 years "to get one" perfect rocket-and-moon shot like Rice's. Bailie added the last time he took a similar photo was in 2000 when Atlas rocket was launched.

"Great job! It's been a long time since someone got it," SpaceX's official photographer Ben Cooper said adding that the photo was first of its kind in two decades.