'Assassin's Creed: Valhalla': How to Get Excalibur, 11 Treasure of Britain Tablets Locations Revealed

Ubisoft's "Assassin's Creed: Valhalla" is doing exceptionally well, and fans of the franchise can't get enough of this Viking journey, filled with more action and gore and tons of secrets waiting to be unlocked, including a legendary weapon Eivor can get--the Excalibur. 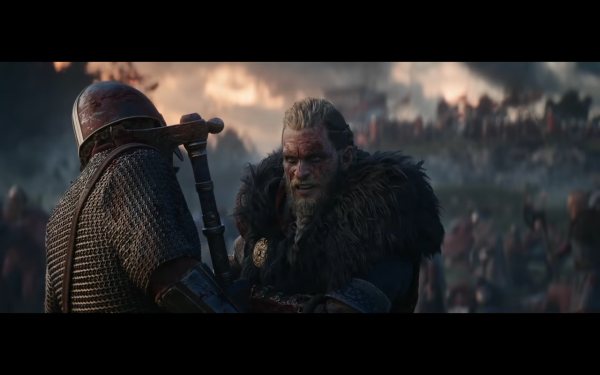 (Photo : Screengrab from Ubisoft North America)
Here are the locations of the 11 Treasure of Britain tablets and the legendary Excalibur.

How to Unlock Excalibur

According to ShackNews, the Excalibur is a pretty powerful weapon, but to obtain it, "Assassin's Creed: Valhalla" fans will have to collect the 11 Treasure of Britain tablets that are scattered across the map, with eight of them located in caves and labyrinths and the final three require killing some powerful Zealots.

Because of that, you may not be able to unlock the legendary weapon during the early game, as you'll need to level up and gain more abilities to take down the Zealots, who are also essential when dealing with the Order of the Ancients.

With that, here are the locations of the 11 Treasure of Britain tablets:

The first location is the Cave of Trials, which can be found east of Canterbury and along Cent's coastline. You have to solve puzzles and look for keys to grab the Treasure at the end of the line.

This location is found down in Suthsexe and close to the border to Cent. As you make your way through the mine, make sure you destroy every possible barrel you can find. By the end of the shaft, you will see a clue saying, "dive where iron thrives."

Go to the water until you see an iron at the bottom. There will be a long underwater corridor, but the Treasure of Britain tablet lies at the end of that corridor.

Grime's Graves is located south of Brishleah Farm in East Anglia. Locate the shaft at the side and then keep pressing forward until you reach the end of the cave, where there are several pots. Break them to find the next tablet.

To find Wiccan's Cave, go down to Eurvicsire and go east of Jorvik and enter the cave until you reach the end with the ice wall. Break it and then grab the tablet on the other side.

The Old Cellar is a cave filled with poison, so you'll want to be careful when going in. It's located in Essexe, south of the lake close to Colcestre. By the end of the cave, there's a puzzle you need to solve with the tablet as the reward.

The next "AC: Valhalla" location you need to go to is the Red Lichen Cavern, found in Hamtunscire and then east of the Wincestre town area. To break the poison inside, make sure you use a torch, then make your way to the area where the Treasure of Britain tablet is located.

Still in Hamtunscire, make your way to the northeast of Chepeham. Around the area, there will be a cavern with a room filled with water. Use some explosives to open the site on the left where the tablet can be found.

The final location where you can find a Treasure of Britain tablet is in Snotinghamscire. Find a cavern in the snow northeast of Hemthorpe. Once you find it, go inside and explore until you discover a way to climb the statues, which will allow you to access a tunnel. By the end of the tunnel, you can grab the tablet and go.

Now onto the Zealots. One of the three Zealots is Woden, a Knight you can find in Cent, where he'll be patrolling along the roads.

Go to Suthsexe if you're ready to take on Hrothgar. The Zealot is often patrolling the roads to the southeast of the region. Head there and wait for the Knight to appear.

Heike is in Essexe and often found on the roads south of Walden. Check the intersections and wait for the Zealot to appear before defeating them.

After acquiring all 11 Treasure of Britain tablets, it's time to unlock one of "Assassin's Creed: Valhalla's" secret.

Finding Excalibur's location can be a little tricky, but the cave where it's in, known as Myrdinn's Cave, is located in Hamtunscire and is nearby Stonehenge. Once inside, there will be a puzzle you need to solve until you reach an area with slots where the tablets will be placed.

Once you put in every tablet you have, the slots will open to reveal Excalibur, which you can then grab.