Elon Musk: China's Chang'e 5 is 'Exciting'—CNSA's Moon Mission is One of the Most 'Challenging' in Country's History!

Elon Musk recognized the foreign space agency's efforts, CNSA's, Chang'e 5 Moon Mission that recently launched on its way towards the moon. The SpaceX CEO is full of hopes and amazement as he called the Chinese's launch an "exciting" feat and as one of the Asian country's most challenging mission in its aerospace history.

The Chief Executive Officer of private aerospace manufacturer company SpaceX is commending China's latest Moon mission and recognized its efforts in the space race that occurs among the country's nations. Elon Musk is known for his large involvement in his company's products, being the primary face of SpaceX.

The Moon mission is not new to the space industry and the nation's competitions. However, this is one of China's early launches and efforts to study the lunar surface, with only a limited mission to collect and return samples from the Moon. 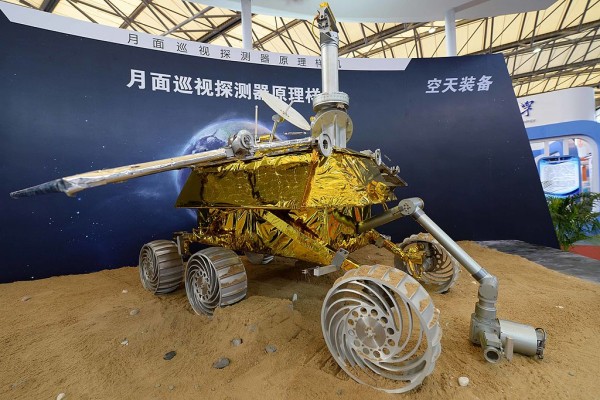 (Photo : (Photo by Getty Images))
SHANGHAI, CHINA - NOVEMBER 05: (CHINA OUT) A model of the Chang'e-3 lunar rover is on display during the China International Industry Fair 2013 at Shanghai New International Expo Centre on November 5, 2013 in Shanghai, China. China is set to launch the Chang'e 3 moon probe with a Shanghai-made lunar rover at the end of the year.

According to Xinhua News, this mission is one of China's most challenging and complicated feat in its entire space history. The spacecraft would collect and return samples from the moon and would not linger on its surface, returning immediately by December 16 to 17.

The SpaceX CEO is engaging his followers in the feats, innovations, and achievements of its company on the short word social media, Twitte. Now he also recognizes the effort of other nation's expedition and triumphs.

According to Elon Musk (@elonmusk), China's CNSA Chang'e 5 Moon Launch is an "exciting mission" when he replied to a former tweet that shows footage of the most recent liftoff. This statement is a massive thing for Musk because of his company's many achievements in terms of space missions.

China's state-affiliated media, Xinhua News, recently posted video clippings of the recent Chang'e 5 mission earlier today, showcasing the spacecraft's collect and return task. Additionally, this launch is one of CNSA's most "complicated and challenging" feat in the space agency's history.

Congratulations to China on the successful launch of Chang’e 5 to the Moon. We look forward to seeing how this sample return will advance the international science community. pic.twitter.com/4G1fLxfg6c — Thomas Zurbuchen (@Dr_ThomasZ) November 23, 2020

With Chang’e 5, China has launched an effort to join the U.S. & the former Soviet Union in obtaining lunar samples. We hope China shares its data with the global scientific community to enhance our understanding of the Moon like our Apollo missions did & the Artemis program will. pic.twitter.com/mPjG4FE0qQ — NASA (@NASA) November 23, 2020

Both NASA and Dr. Zurbuchen's statement is hoping for China's joint effort to contribute the data it collects from the moon to the international space community.

Related Article: China Wants to Launch 10,000 Satellites Into Space to Compete With SpaceX