Apple Mentorship Program for First Gen College Students Kicks Off by Early 2021: How to Apply

According to a PDF file uploaded by MacRumors, Launch@Apple caters to first-generation freshmen and sophomore students that major in/ are intending to major in business courses such as finance, accounting, mathematics, data analytics, and economics, or any other courses of the similar discipline.

Selected students to participate in the program gets the opportunity to have a one-on-one session with Apple mentors.

According to MacRumor's released file, One of the qualifications of being a delegate is to have an eagerness "to learn about working in finance in a fast-paced, innovative environment." Participants will get to have a first-hand experience of Apple's best practices on business and finance in a very competitive environment, which is very much reflective of Apple's market.

With technology and resources that provide ease of access to professional learning, opportunities like Apple's College Mentorship Program easily provides students with a top-grade mentorship experience.

Read Also: Why Technology and Collaboration are Driving Higher Education

The freshmen and sophomore students do not only get the chance to attain resources for learning, but also get a spot for opportunities for professional development, such as job opportunities, paid internships, and paid externships to by sponsored by Apple in the future.

Apple has not officially released Launch@Apple to the public yet, but the file circulating indicate they are already accepting applicants from a wide range of GPAs ahead of the college mentorship program's launching which commences early in 2021.

How to Apply to Apple's Launch@Apple College Mentorship Program?

Apple will need to have all applications accepted for assessment by January 8, 2021 for the Launch@Apple College Mentorship Program. Students who want to be delegates in the program must be qualified under the necessary requirements set forth by Apple.

Qualifications include necessary course requirements, college level, parents not being able to obtain a college degree, and the eagerness to learn. 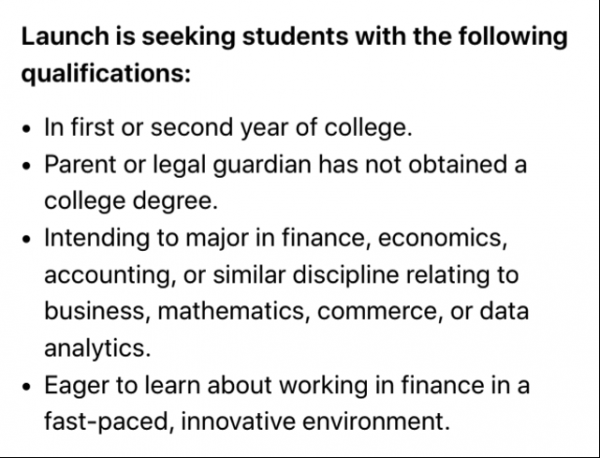 The application form needs to be filled out with necessary requirements such as Name, School, Intended Major, and GPA. According to the released file, necessary questions need to be answered as "openly and honestly as possible." 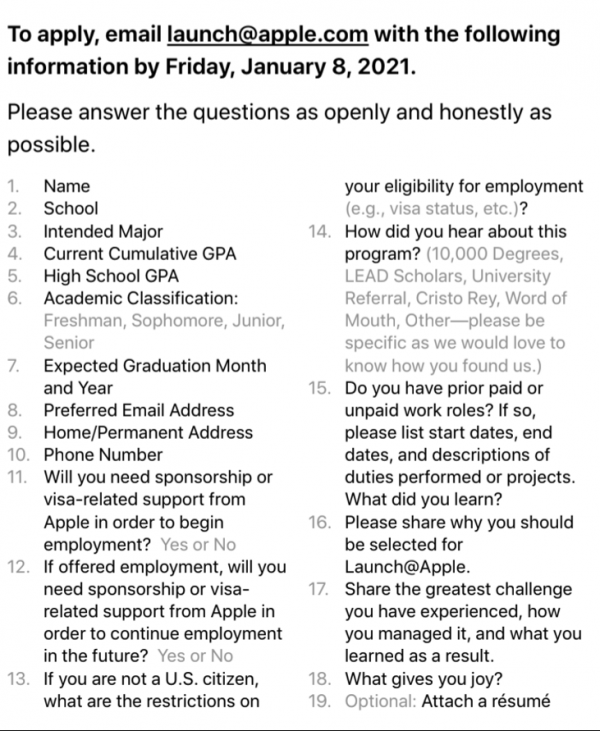 Questions are geared towards assessing whether the applicant is capable of attending the mentorship program, and whether he or she deserves to be selected as a delegate of the program. Other questions assess applicants' personalities such as by asking what gives them joy.

The application form needs to be submitted along with the necessary requirements via email to launch@apple.com

According to MyHealthyApple, Apple's College Mentorship Program is somehow engineered similarly to that of Google's Summer of the Code Mentorship Program. The difference is that instead of training potential programmers and developers, Apple's program is geared towards honing and eyeing students interested in business and finance. They are also looking for students with potential to be part of Apple's team in the future.

Apple's very lucrative college mentorship program has been getting attention from many sophomore and freshmen students. The program gears on eyeing first-generation college students as delegates for the said program since they are often  challenged with the lack of resources needed to succeed in a very competitive working environment.

Apple has a proven track record as a multinational technological giant. It has exceeded expectations that go beyond providing utilities for consumers.

This article is owned by TechTimes written by Nikki Delgado