Google's latest Pixel Phones Pixel 5 and older version Pixel 4A 5G camera has been deprived of its access to the ultra-wide camera angle for astrophotography features. With the launch of the new Google Camera 8.1 Update initially aimed at fixing bugs and improving camera features, users have been complaining of the dysfunctional wide angle lens. 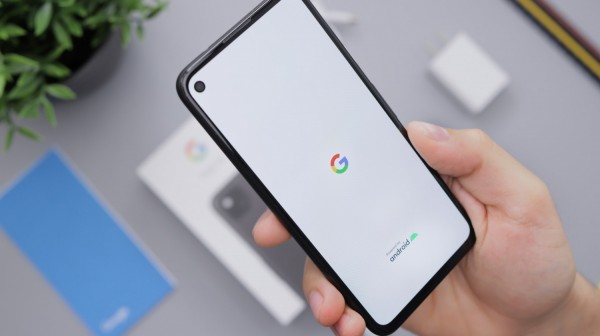 The innovative camera feature was what set the Pixel phones apart from other camera-savvy phones in the market. The Pixel 5, which is Google's flagship phone which has ended the Pixel 4 series, has replaced telephoto lenses from Pixel 4 Phone with a wide-angle camera due to popular demand. Both Pixel 4A5G and Pixel 5 has a 12.2 megapixel, with 16 megapixel for ultrawide lens. Both produce photos that are well-lit, balanced, sharp, and contrasty.

One interesting functionality is the astrophotography feature which allows users to perfectly capture the light and colors for the night sky by directing their phone up. The user needs to keep the camera on hold in a still position to get the right shop

Both smartphones are promising because of their premium camera features but is now a source of disappointment from users who chose to install the Google Camera 8.1 update.

The astrophotography feature is still accessible in the phones' camera settings. However, as you go to the Night Side Mode before selecting ultra-wide angle camera, the camera doesn't automatically switch to Astrophotography mode, which is the case before the Google Camera 8.1 update. Usually, at this step, a prompt should appear "Astrophotography on." Following the update, a warning appears instead saying "Zoom to x1 for astrophotography." 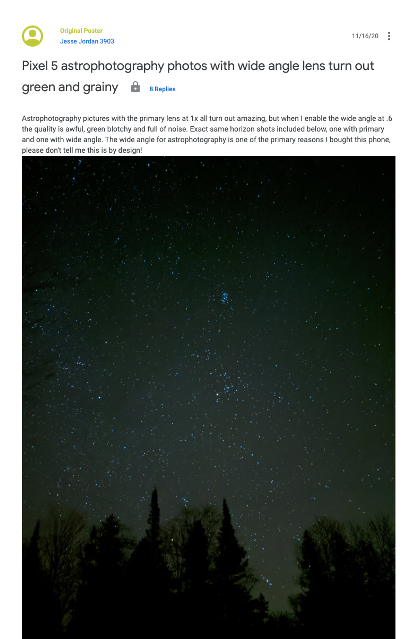 After hearing numerous complaints, Google has updated their document to update the matter. According to Google's Photography Support Document, Pixel series 4A 5G and Pixel 5's Astrophotography features are only limited to zoom settings equal to or greater than 1x.

It's not the first time that Google has ecountered complaints for having issues with camera functions. Google Pixel 3 also had camera issues in the past when a number of users complained their cameras were shaking.

The Google Camera update was out for a month and a half before people started noticing the dysfunctional Astrophotography wide-angle feature. Many users were disappointed at Google's response that instead of fixing the issue, they've limited the Astrophotography options to accommodate the problem. For users who considered this a primary reason for buying Google's Pixel 4a 5G and Pixel 5, it can be a reminder that product features may still change from time to time.

This Article is owned by TechTimes written by Nikki Delgado