How many Shelby Cobras can you think of? According to MotorTrends, Shelby has managed to produce around 1,000 authentic Cobras between the years 1961 to 1968 alone. After tons of legal dealings, Shelby has decided to manufacture a limited production of authentic Shelby-licensed Cobras. 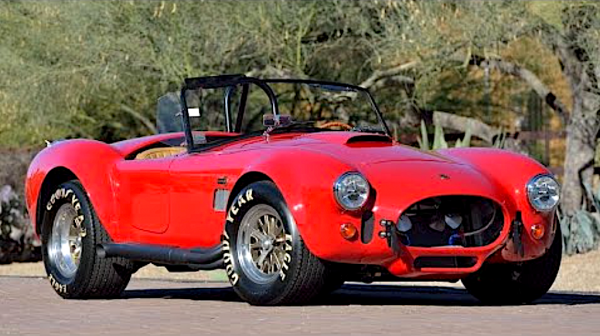 Since then, only two out of the ten planned FAM (Ferrari's Ass is Mine) Cobras were manufactured by AC.  One of the FAM Cobras is set for auction at the Mecum's Glendale Sale scheduled this spring. Interestingly, it was onced owned by the late "Fast and Furious" superstar Paul Walker. The FAM Cobra is also commissioned by Carroll Shelby himself.

As HotCars reports, this FAM Cobra is one of the rarest serialized Cobras that wears the official Shelby Crest. It is coated in Rosso Corsa red, which is a signature shade in Ferrari. It is designed by a Ferrari-aping tan interior.

The beast is a 427 Cobra, which means that there's ample power below the curved front hood to jumpstart the Hoover Dam's generators. It is powered by a 468-cid (7.6-liter) big-block V-8 and runs on 550 horsepower, which is fast enough for a light car. It can spin on Tremec five speed with a four-wheel independent suspension, powered by Wilwood brakes.

Through the years, the additions have multiplied tons of times, where it's made it easier for Cobra replicas to cripple around.  Carrol Shelby has faced numerous tough lawsuits with Cobra Replica peddlers after he has faced tons himself with the Ferrari at Le Mans in the 1960s.

After tons of chest-high legal dealings, Shelby has finally reached an agreement with manufacturers such as Factory 5, Superperformance, Kirkham Motorsports, and AC cars. In the late 1990s, it has finally come to a conclusion that a limited production of authentic Shelby-licensed Cobras will be produced. Since then Shelby himself commissioned some Cobra units.

In the last part of the 1990s, Shelby appointed AC Cars to construct a run of 14 CSX1000 Cobras, all molded from hand-moved aluminum like the authentics. Ten among the CSX1000 vehicles were to be furnished in "Ferrari's Ass is Mine" category per Shelby, reviewing his popular vow when the Shelby group has been defeated during the 1964 World Manufacturers Championship.

As shown in the film "Portage v. Ferrari," Shelby got back with the monetary and specialized support of Ford with the GT40 when he was able to bring home the laurels in 1966 and 1967. Now, only two of the FAM Cobras are up, and one of them will be up for auction this spring.

For Shelby fanatics, this is a rare chance and genuine find considering it's one of the brand's modern innovations. You can register now to bid on the Ferrari before auction ends in March.