How to Prepare Yourself for Xbox Series X's 'The Medium': Mission List and Tips

For those who have been waiting for a brand new horror game to keep them awake throughout the night, "The Medium" has officially been released for Microsoft Windows and Xbox Series X and Series S, and we're here to guide you prep for the game, which is also available for this month's Xbox Game Pass.

(Photo : The Medium Game / Facebook)
"The Medium" is a psychological horror game developed by Bloober Team.

'The Medium' is Now Available

"The Medium" is a psychological horror game from Bloober Team that revolves around Marianne, the titular medium, who was invited to the abandoned Niwa Hotel, where she must use her abilities to uncover the secrets of the hotel and help the trapped spirits in there.

According to Eurogamer, "The Medium" is a linear game with a series of missions.

Usually, there is one main mission, which is broken down into multiple smaller missions with specific objectives, and clearing every goal would clear the entire mission and you would move on to the next, often after watching a cutscene.

The objectives are tied to your current location so all you need to is explore.

However, there would be parts in the game, especially in the latter half, where you won't be told of the objective, so this guide should be able to help you in case you get stuck.

Before anything else, here are some beginner's tips that can help you in your journey as Marianne:

First of, make sure you run whenever you can. Marianne walks rather slowly, so even if no monsters are chasing you, run.

The main character has some abilities you can use, but be careful as Marianne's spirit power level would decrease the more you use her powers. It would be indicated by the white rings around her arm when you move to the spirit world.

Next tip is to always check on both worlds. As a medium, Marianne can move between the material world and the spirit world and would have objectives on both sides, so if you end up getting stuck in one world, it might mean you've forgotten to do something on one side.

As you explore the abandoned hotel, you'll come across objects that have traces of the people that once owned them, and once you're near these items, you should hear whispers. With that, it's indeed recommended to use some headphones, just as what the game would suggest to you as you open "The Medium."

With that, here is the complete list of mission available throughout the game, including the objectives that can guide you in case you are stuck. 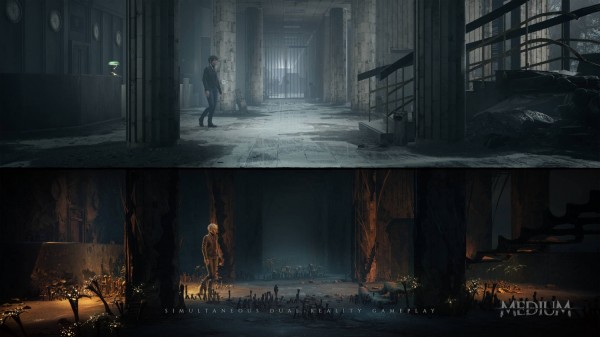 (Photo : The Medium Game / Facebook)
Marianne can travel between two worlds, so be sure to check out both realities.

After this mission, you should try your best to escape the monster to move on to the next mission.

Once you get inside, look around and investigate the current location, then you will be tasked to free Richard of his demons.

Find a Way Through the Ruins

At this point, you must then find a way to stop Henry before you can move further to the next mission.

Then, make your way through the underground corridors, where you'll be tasked to pump the water to clear the way and allow you through.

Finally, make your way to the lake and unfold the finale of the "The Medium."