Tesla has debuted the "Yoke" steering wheel at the beginning of the year, alongside the Tesla Model S which is the first electric vehicle that received the reconfiguration from the company for early 2021. Initially, the "Yoke" steering wheel received mixed reactions from the public and was mostly negative as it removed several switches for the turn signals and wipers. 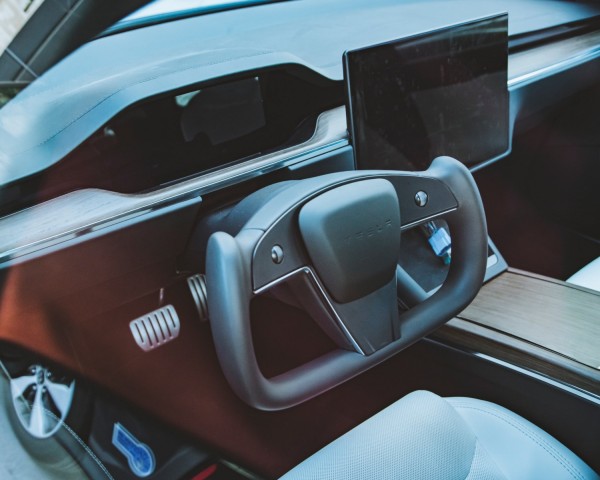 The disappearance of these knobs and switches is new for long-time drivers as they have been accustomed to the traditional light, turn signals, and window wiper or washer function in these knobs. Also, the most used purpose for these knobs is toggling the "bright" mode of the headlights that can also serve as a warning to other vehicles or pedestrians that one is passing through.

All those are removed and are integrated with the two, almost hidden force touch buttons that could control the lights, turning signals, and window wiper functions in the steering wheel. The introduction of the Yoke also said farewell to the more moving parts around the steering wheel, which has been apparent in modern electric vehicle designs.

A Twitter user and media outlet called "The Kilowatts" (@klwtts), has recently released the first look photos of the actual "Yoke" steering wheel on public and inside a Tesla Model S and X refresh for 2021. The new steering wheel was purchased and chosen by its owner, as Tesla offers a choice for buyers to opt for the regular or U-shaped steering.

Initially, there were various wild reactions on the "Yoke" steering wheel which was referred to as a "spaceship" or jetplane steering for its design, which is an unusual one in the modern car industry. Most designs include the traditional round steering, with some touching up these designs with a flat bottom or embedding its surfaces with edges.

The Yoke steering wheel is one of the firsts to utilize a U-shaped one that has removed all of the knobs around the wheel. Users have now come to the liking and acceptance of the Yoke and are seeing the "aesthetic" that Tesla initially debuted alongside the Model S 2021 redesign. However, there are still a few that does not appreciate the new wheel and still screams no to the company.

March is the initial target date of the 2021 Tesla Model S and X refresh to release to the public, debuting the Yoke steering wheel, Full-Self Driving beta (for selected ones only), the horizontal infotainment system, chrome delete, new wheels, and other list of features.

The preorders and introduction debuted in January this year and are looking at a release two months later. Now, the time has come for Tesla drivers to receive the new Model S or X, and here, Tesla's promise of distraction-less driving would soon come. Deliveries would roll out anytime in the coming weeks of the month.