"Destiny 2" celebrates International Women's Day with a viral take over by the Empress of Cabal, Caiatl.

(Photo : Bungie via Screenshot)
In Season of the Chosen , as the Pyramids and Xivu Arath continue to destabilize the system, a new force emerges. Empress Caiatl, Leader of the Cabal and daughter of Deposed Emperor Calus, seeks an alliance with humanity. But when she demands more than Zavala can offer, negotiations collapse, and Guardians must become the tip of the spear that strikes at her growing war council.

Caiatl Takes Over To Recruit Guardians

The villain of "Destiny 2" has hacked into both the official Destiny Twitter and Facebook accounts and started claiming it as her own. 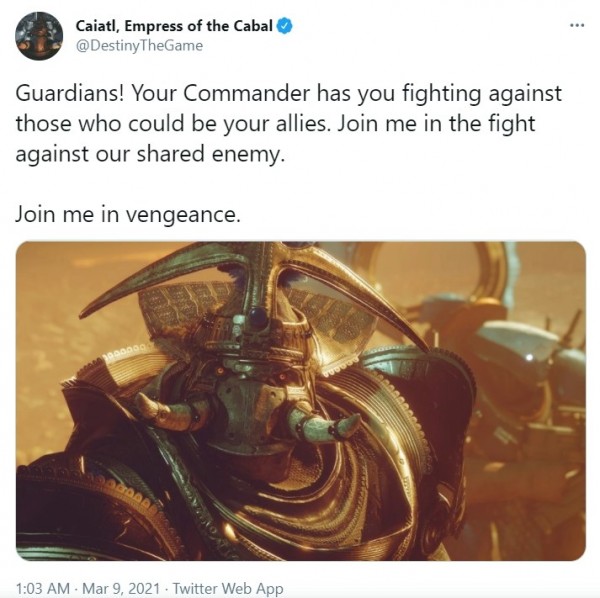 (Photo : @DestinyTheGame Twitter Account via Screenshot)
Guardians! Your Commander has you fighting against those who could be your allies. Join me in the fight against our shared enemy. Join me in vengeance.

Her posts are all Cabal-related, as Caiatl promotes her faction while recruiting the players to join her forces. She also shows off various Cabal iconography.

The excitement doesn't stop there. Caiatl interacts within the comments section, and the Empress displays a lot of personalities. 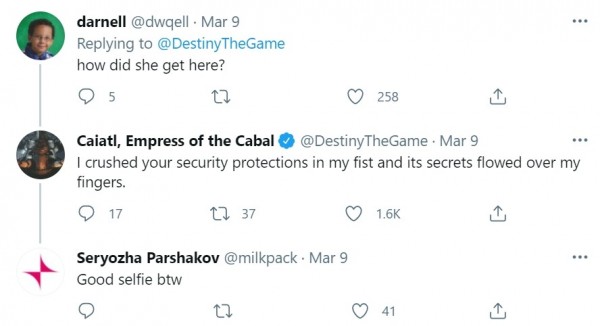 The New Empress Caiatl is the daughter of the exiled Emperor Calus. She enters the Solar System and starts off this season with an offer of an alliance against the Darkness- only if the Guardians serve under her as the Empire's subordinates.

A full cutscene was released back on February 9, 2021. Caiatl taking over the Cabal Empire marked the beginnings of the Season of the Chosen.

An Empress has emerged from the ashes.

Zavala and the Guardians have obviously refused. This blows out to a second war against the Cabal, along with the darkness-corrupted soldiers of the Taken and Black Feet tetrahedral forces, also known as the Pyramids.

The Hive god Xivu Arath also prepares to invade the system. The Guardian has a lot of events to look forward to.

Log in this week, and you will find a cutscene about Zavala's storyline. A YouTuber named Esoterickk posts the full video of it:

The video shows Crow unmasked and appearing in front of Zavala to warn him about a Psion assassin. Zavala kills the assassin but assumes the encounter was his hallucination of Uldren Sov.

Later in the lore book, Osiris yells at Crow for taking his mask off inside the city. It becomes clear that only Osiris and you, the player, know about his true identity. There are speculations(LINK) that the end of the season will conclude with Crow's unmasking.

The lore concludes when Osiris puts Crow in Zavala's security detail. The game also has a lot to offer. With the Season of the Chosen still ongoing, new upgrades and in-game content are being released.

If you have not tried it yet, enjoy playing in the Battlegrounds available to the current Season Pass.

First, complete the Behemoth battleground and defeat the commander Darcus to receive the Bell of Conquest artifact.

Then you can gain access to the H.E.L.M. HELM is a newly released area hub found on the Tower in-game. Here, players can interact with the War Table and get Battleground bounties to access new challenges. Players can also access their Vault inside the HELM to store or equip their gear.

Finally, you get to unlock the Hailstone. This is a battleground located at the center of Europa. You'll fight with the Cabal forces and be tasked with defeating Basilius the Gollem. Defeat him to unlock the event rewards.

Bungie is taking its advertising the game to a whole new level with this promotion. Caiatl's takeover has received over 1216 Retweets, 442 Quote Tweets, and 15.8K Likes in a day of release.

Related Article: 'Destiny 2': Festival of the Lost 2021-Monsters vs. Dinosaurs and More!

ⓒ 2021 TECHTIMES.com All rights reserved. Do not reproduce without permission.
Tags: Destiny 2 Season of the Chosen Gaming Twitter Cutscenes Lore
Most Popular