NASA released a space recording that was taken on the Perseverance rover last February. The audio was captured by the SuperCam instrument, which the Los Alamos National Laboratory developed.

The said instrument has been a useful venture of the French Space Agency in carrying out its operations like capturing the audio of laser zaps from the other distant planet.

SuperCam Instrument is now a reality 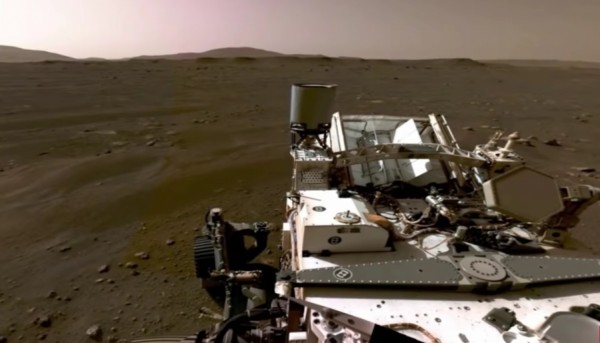 (Photo : Screenshot from YouTube/Gateway to Knowledge)
Experts say that the first recording captured by SuperCam on Perseverance rover sounds like Earth breeze.

In a report by ABC News, the sound captured through the instrument aboard the Perseverance rover on Mars is similar to the breeze we hear from our planet. For Rogel Wiens, the principal investigator assigned to the SuperCam instrument, the discovery has brought excitement to their Red Planet exploration.

Weins continued that the creation of the SuperCam was only a dream of the team eight years ago, and he knew that what they thought could be 'too much.' Now, he could not express the joy that happened as the device is working as they have expected.

On top of the rover's structure, a 5.60-kg sensor head is attached. The said component can run five different types of analyses concerning the geological structure of the Red Planet. For example, this helped the experts study the rock formations to know if living on Mars is possible.

Since Feb.18, the very first time that the Rover set foot on Mars, scientists have been consistent in conducting system checks and gathering information from our distant neighbors.

For Naomi Murdoch, a research scientist based at Toulousse's ISAE-SUPAERO Aerospace Engineering School, it is amazing that they get to listen to the first audio recording of the satellite upon its landing on Mars.

Read Also: NASA Mars Rover 2021: Where to Watch Plus 5 & Strange Things That it Will Bring to Mars!

If there is an Earth Wind, There is Also a Martian Wind

The recent audio recording was revealed last Mar. 9 through the SuperCam. It was acquired 18 hours after the Perseverance rover's touchdown on Mars. The audio captured by the instrument sounded like the Earth's breeze, but in this case, since it is on Mars, it is called the Martian wind, Phys Org reported.

NASA associate administrator for science, Thomas Zurbuchen, said that he was congratulating their partners on the SuperCam team for the accomplishment. Moreover, it was alluring to see the Red Planet's beautiful rock samples after the lasers on the Perseverance rover struck them.

Furthermore, Zurbuchen added that the team's information will be a vital part of their once-in-a-lifetime Mars Sample Return campaign, which is the most accomplished planetary mission by far.

Meanwhile, the promising instrument was reported to receive the first datasets from the VISIR (visible and infrared) sensor and the Raman spectrometer. The function of the VISIR is to gather light that bounces back to the sun. This will aid the scientists in having an in-depth study of rocks and sediments.

This goes well with the said spectrometer, which utilizes a green laser beam to trigger a sample's chemical bonds. Depending on the types of bonded elements, the process will now generate various signals, which help determine the composition of a mineral.

"This is the first time an instrument has used Raman spectroscopy anywhere other than on Earth. Raman spectroscopy is going to play a crucial role in characterizing minerals to gain deeper insight into the geological conditions under which they formed and to detect potential organic and mineral molecules that might have been formed by living organisms," said Olivier Beyssac, CNRS research director at the Institut de Minéralogie, de Physique des Matériaux et de Cosmochimie in Paris.