The latest "CoD: Warzone" R1 Shadowhunter will be removed from your inventory after Activision confirmed the weapon's availability is a mistake. The game developer added that it would refund the money of those players who purchased the new crossbow. 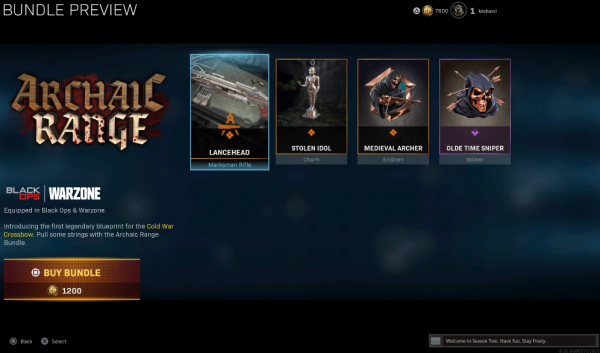 The Warzone Store currently has this “Archaic Range” bundle that includes the un-released Crossbow for Cold War & Warzone.

NOTE: As of now, buying it does nothing. The weapon does not get added to your inventory yet. It shows up in the Bundle Locker but cannot be equipped. pic.twitter.com/c2bfTDl09S

According to PC Gamer's latest report, Activision finally responded to the negative feedback of the players since they complained that the new weapon is unusable in an actual match. However, this new crossbow can still be used in "Call of Duty: Black Ops" zombies and multiplayer mode.

An issue with the R1 Shadowhunter weapon appearing earlier than planned in Warzone and Black Ops Cold War has been resolved.
Refunds are planned for players who purchased the bundle while it was live in the Store, and the bundle and in-game challenge will return at a later date.

Previously, the game publisher said that the players could buy it if they complete the new mission, which requires them to get three one-shot, one-kill medals in 15 matches with zero attachments. Activision confirmed the issue through its latest tweet.

"An issue with the R1 Shadowhunter weapon appearing earlier than planned in Warzone and Black Ops Cold War has been resolved," said the game developer via its official Twitter account.

"Refunds are planned for players who purchased the bundle while it was live in the Store, and the bundle and in-game challenge will return at a later date," added the company.

What will happen to the 'CoD: Warzone' mission?

Activision said that the players would have their refund from the game's real-money store. But, the game developer might have a problem with those fans who acquired the new crossbow for free.

I've been playing since the first one but I love the way things are going honestly. Let me know your list!

Also Read: 'Cyberpunk 2077' to Have a Weird Cops Update; Here are Other Details of Game's Patch 1.2

On the other hand, the company also explained that it would reset all the progress made by the players for its new mission linked with the R1 Shadowhunter. This was confirmed by a Treyarch community manager, saying that everyone will be forced to start over. As of the moment, Activision hasn't released any confirmation yet regarding the weapon's release date.

Although the removal of the latest R1 Shadowhunter crossbow is sad news, there are still some one-shot weapons that you can use. PC Games reported that there are several one-shot-one-kill guns in the popular "Call of Duty: Warzone." To help you further, here is the complete list:

For more news updates about "Call of Duty: Warzone" and its upcoming weapons, always keep your tabs open here at TechTimes.

Related Article: 'CoD: Warzone' Might Have Its Most Broken Weapon; How to Get Crossbow and Best Loadout to Use