Twitter CEO Jack Dorsey Shows Off 'BlockClock Mini' Bitcoin Clock at US Congress Hearing: What Does it Do?

On Thursday, Mar. 25, CEOs Jack Dorsey and Mark Zuckerberg and Google CEO Sundar Pichai testified against the spread of misinformation on social media platforms in the U.S Congress.  When Twitter CEO joined the meeting though, unique clock was seen from his kitchen, what is it? 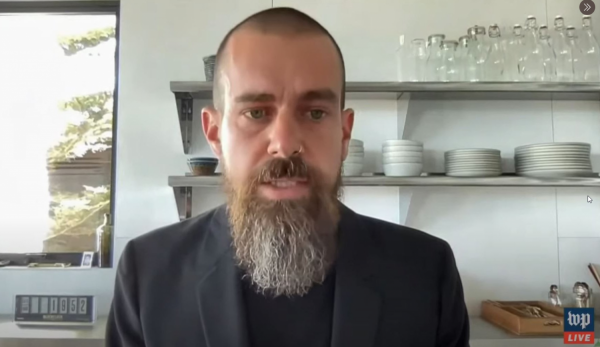 Based on reports from CNet, the display on the clock is not the actual time nor date, either. These are real-time updates that the Bitcoin Blockchain displays, housed in a custom-made Bitcoin clock box by cryptocurrency manufacturer Coinkite called the Blockclock Mini.

This gadget is a Wi-Fi-enabled device . Its main function is to show the current Bitcoin exchange rate and other cryptocurrency data. It connects to Opendime to display data such as balances and fiat value, as well as deposit QR codes, as explained by its device maker Coinkite.

Some people on Twitter have been discussing that Jack Dorsey has a bitcoin clock and showed it off while attending a congressional hearing.

Jack Dorsey flexing his #Bitcoin clock while testifying to the United States Congress is just...👌😎 pic.twitter.com/7S8IPpHor9

Jack Dorsey has a #Bitcoin BLOCKCLOCK behind him as he testifies infront of the United States Congress. pic.twitter.com/nAJ96cWGBF

1305ET What's the story on the Internet appliance(?) in the background of @Jack Dorsey's video stream at today's hearings on misinformation?

What is it? What is it counting? pic.twitter.com/aMvfsML8PB

TheVerge reports that if you are enthused by the BlockClock mini that you saw on Dorsey's counter, then you may not get your hands on one anytime soon.

Coinkite tags it as a "long-lead item." Even the description indicates that "due to high demand, lead times may vary."

The device's main website has a big button leading to Coinkite's store, which does not seem to be very encouraging.

Why Does Jack Dorsey have a bitcoin clock?

(Photo : Photo by Coinkite by Coinkite)
Jack Dorsey Shows Off His Bitcoin Clock

Those who may not know this are likely to be unaware that Jack Dorsey is a bitcoin fan. The sole thing in his Twitter profile description is "#bitcoin" with a bitcoin logo's Twitter emoji.

Additionally, he said in 2018 that he believes Bitcoin will become a currency in the next decade and become a universal currency.

A partnership between him and Jay-Z was announced in February, resulting in a $23 million bitcoin development fund.

According to The Verge, Square, his other company, invested $50 million in Bitcoin in October 2020 and boosted that amount shortly after another $170 million investment in February. You can also purchase bitcoin with Square's Cash App.

It appears that Dorsey is quite interested in blockchain technology, as he has auctioned off his first tweet in the form of an NFT for $3 million, with the proceeds going to charity.

Based on this information, the Twitter CEO has contributed much more than most people realize to the Bitcoin development process.

Will he continue showing off more tech-related to bitcoin or add Bitcoin usage across more of his apps like Twitter? Only time can tell, but it seems to be going into that direction.