Algorithm Used by Netflix, Facebook Trained to 'Predict' and Crack the 'Biological Language' of Cancer, Alzheimer's

An algorithm, which is similar to what Netflix, Facebook, and Amazon use, was able to "predict" the biological language of cancer and neurodegenerative diseases, including Alzheimer's.

According to an Apr. 8 report from Daily Mail, academics at St John's College, University of Cambridge fed a neural network-based language model with data accumulated from decades of research to see if artificial intelligence can further the studies better than humans.

They found that the machine-learning technology was able to predict the "biological language" of cancer with accuracy comparable to when knowledge-based features were used.

The study, which was published at the Proceedings of the National Academy of Sciences (PNAS) on Apr. 8, could be used to "correct the grammatical mistakes inside cells that cause disease."

Knowles added that the research aims to use artificial intelligence to develop targeted medicine to dramatically ease symptoms or to prevent dementia from happening at all.

The algorithm used in the study, termed DeePhase, is a type of AI that uses predictive analytics to analyze historical and existing external data to find patterns and behaviors.

The AI is similar to what Netflix uses to recommend shows, as well as what Facebook uses to make a friend suggestion.

Learning the Molecular Grammar Through AI

The reaserch, titled "Learning the molecular grammar of protein condensates from sequence determinants and embeddings," was officially announced by St John's College, University of Cambridge on Apr. 8.

Dr. Kadi Liis Saar, first author of the research was tasked to train the predictive AI with generated datasets to had better understand how proteins work.

According to Saar, the human body is composed of thousands of proteins, in which functions have not been fully understood and DeePhase was created to learn the language of proteins.

She explained how the team specifically asked the program to learn the language of shapeshifting biomolecular condensates that scientists have been trying to understand to finally understood the language of biological function and malfunction that cause cancer and neurodegenerative diseases like Alzheimer's.

The research team concluded that DeePhase was able to learn what scientists have already discovered after decades of research without being explicitly told. 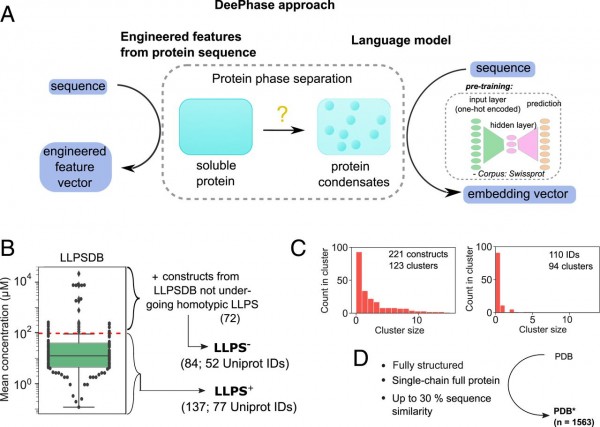 Proteins are complex molecules that play many critical roles in the body especially for the structure, function, and regulation of the body's tissues and organs.

A healthy person has a certain kind of quality control system that effectively disposes of masses of proteins that are considered dangerous to the body.

When someone suffers from a neurodegenerative disease such as Alzheimer's, his or her proteins go rogue, form clumps, and kill healthy nerve cells.

Saar stressed the importance of bringing natural language processing technology into the research of molecular origins of protein malfunction, adding that doing so could dramatically help to correct the grammatical mistakes inside cells that cause disease.