SpaceX was recently awarded the contract of NASA for the Artemis Moon Mission for $2.89 billion to produce a human landing system (HLS) Starship to bring humans to the lunar surface. This feat was not done by any company or NASA since the last of the Apollo missions, with SpaceX being the only winner that has beat Jeff Bezos' Blue Origins.

The National Aeronautics and Space Administration (NASA) has been working with SpaceX for several collaborations now, including resupply and payload missions to space, and the Commercial Crew Program. Last November, it was known that new NASA astronauts have been successfully brought to the International Space Station aboard the SpaceX Crew Dragon.

The track record of SpaceX has been proven with its long-running relationship with NASA, including its lengthy prominence that brought massive payloads to outer space, whether with the space agency or others. SpaceX has proven itself to be one of the most prominent private company which the space agency can rely and partner itself with. 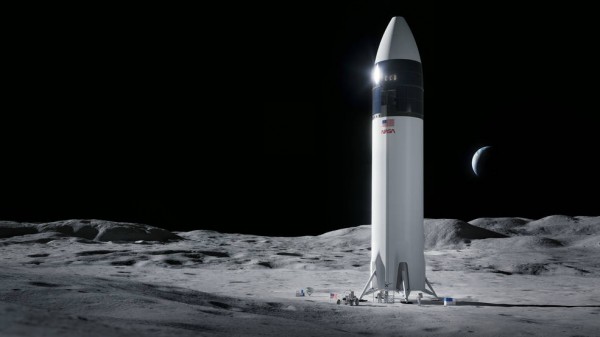 (Photo : Credits: SpaceX)
Illustration of SpaceX Starship human lander design that will carry NASA astronauts to the Moon's surface during the Artemis mission.

According to a recent press release from NASA, SpaceX would be the partner for the Artemis Moon Mission, particularly in helping bring the two lead astronauts for the return mission. The last Apollo mission was from 1972, which is almost 50 years from now, with its Greek Twin counterpart, Artemis fulfilling the return to take place in 2024.

Artemis is also an iconic name for this SpaceX NASA Moon Mission because it would aim to bring the first woman to the lunar surface, along with a person of color, that would change the future of space opportunities. The return of humans to the Moon in 2024 would surely be iconic, especially as it changes a lot of norms with it.

What is the HLS Starship?

SpaceX will play a massive role in the Artemis Moon Mission and this would be getting the astronauts of NASA to the lunar surface safely, which needs a spacecraft to lower down from the main ship. From the Space Launch System (SLS) rocket, SpaceX's HLS Starship would bring these astronauts down and back up to the ship to complete the mission.

NASA said that the HLS Starship was designed for the Moon and its conditions, which is why it would play a massive role for the upcoming mission in revisiting the lunar surface after 50 years. The space agency also regarded that this would be a stepping stone for other missions, particularly as they eye for the neighboring planet, Mars.

NASA's Artemis Moon Mission was years in the making, and the year 2024 is fast approaching for the upcoming venture towards the lunar surface to discover more of it since the last feat. It would bring the best of NASA with the SLS, along with SpaceX's HLS Starship to bring them down to its surface and back.