"El Risitas," the man behind the viral "Spanish Laughing Guy" meme has passed away at 65.

Juan Joya Borja, the Spanish comedian better known as El Risitas, became an internet sensation for laughing hysterically while telling his stories and mocking the Macbook.

El Risitas: the Story Behind the 'Spanish Laughing Guy' Meme

El Risitas rose to prominence in Spain after being featured in a late-night talk show called Ratones Coloraos, where he told funny stories with host Jesus Quintero sometime in 2007.

According to The Vice's Apr. 29 report, Borja found his own story hilarious that he could barely keep himself together while telling stories about his time as a kitchen porter.

In 2014, people who saw the segment on YouTube used a screenshot of Borja's interview as a meme and uploaded it with subtitles totally unrelated to the comedian's story, giving birth to one of the most prominent memes in internet history. 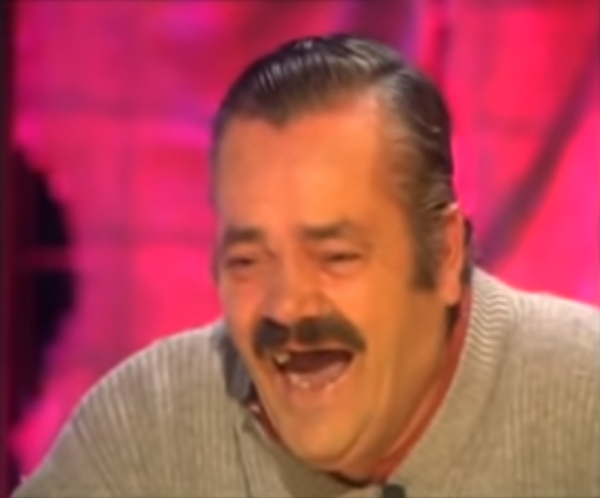 Its popularity soon picked up after someone added fake subtitles making Borja pose as an Apple Engineer who is sharing stories about how Tim Cook saw the prototype of the 2015 Macbook.

Many followed suit and made parodies by adding fake subtitles on the video clip, even reaching Twitch as a third-party emote named KEKW.

Memes are images or video clips copied from their original source and shared with slight variations to add humor. The culture had spread through the internet like wildfire, and its use does not choose any topic, as long as there is humor in it.

One of the most notable memes in 2021 features the cargo ship that found itself stuck in the Suez Canal, causing a global logistics crisis in March.

Borja was a comedian and actor from Seville, Spain known by his stage name, El Risitas or "The Giggles."

According to La Vanguardia's report, his interview with Quintero earned him his fame because of his infectious, high-pitched, wheezing laugh that led to his nickname.

El Risitas had spent his life jumping from one odd job to another, such as cooking and unloading cement before finding himself telling unscripted stories as part of a segment in Quintero's show.

Borja also appeared in a 2005 film titled "Torrente 3: El Protector," as well as in a Finnish pizza commercial where he ends the advertisement with his signature laugh and tagline "Cuñaaaaaaaaao."

In 2020, Borja was hospitalized due to cardiovascular complications leading to his leg getting amputated.

Despite his fame and entertainment career, he stayed at a local hospital for the elderly who do not have resources or family members who can take care of them. To help with his condition, fans organized a fundraising campaign for him to buy him an electric scooter after his amputation.

On Wednesday, Apr. 28, Borja passed away peacefully while recuperating from his leg amputation.