Ibuprofen Does Not Intensify Covid-19, Study Confirms -- When Does it Become Harmful?

Contrary to other previous claims that ibuprofen makes Covid-19 worse, a study finally cleared it out. The intake of it does not aggravate a patient's condition. It doesn't further increase the severity of the virus or even the risk of dying from it.

During the early days of the pandemic, concerns about the after-effects of non-steroidal anti-inflammatory drugs (NSAIDs) arose. 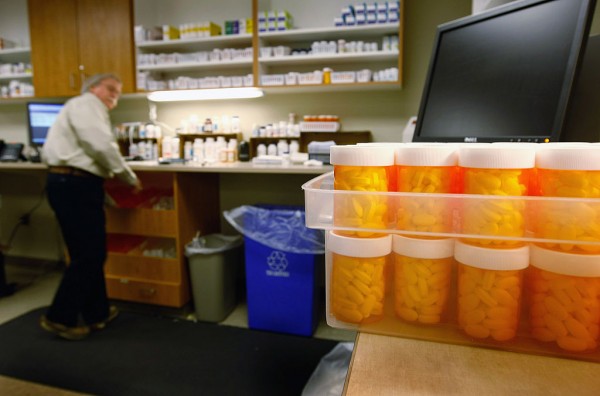 (Photo : John Moore/Getty Images)
AURORA, CO - DECEMBER 01: Pharmacist Hank Wedemeyer fills prescriptions as generic diabetes medicine awaits distribution at a community health center for low-income patients on December 1, 2009 in Aurora, Colorado. The Metro Community Provider Network (MCPN), which has 11 health centers in the Denver area, has seen a 138 percent increase in patients during the last year of recession. Community health centers such as MCPN could play a major role nationally if health care reform is passed, with increased subsidies from the federal government as well as millions of newly-insured low-income citizens seeking care.

Furthermore, as The Lancet reported in April 2020, NSAIDs increase the protein angiotensin-converting enzyme 2 (ACE2) levels. It is said to be the entryway of the Covid virus to humans. Therefore, some doctors feared that it would increase the ability to contract the virus.

Furthermore, some evidence also relates the vulnerability of hypertension and diabetes patients to NSAIDs, The Lancet reported.

The said drug is commonly used to fight against minor pain and cardiovascular diseases.

Read Also: Pfizer, AstraZeneca Vaccine Side Effects Are Not Too Bad, Study Suggests

Ibuprofen on Covid Severity and Mortality

However, a study of 70,000 hospital patients shuts down this concern. The research published at The Lancet further said that ibuprofen, a non-steroidal anti-inflammatory drug, "does not increase the mortality or severity" of Covid-19.

The research also suggested the NSAIDs have no clear impact on Covid 19 outcomes.

Moreover, the researchers dubbed their study as "the largest study of in-hospital outcomes of patients with COVID-19 to date."

In a more specific manner, the researchers studied 70,000 hospitalized Covid 19 patients in the United Kingdom. Furthermore, a total of 4,211 have taken NSAIDs before their admission.

Patients who took the said drug, in comparison to those who did not, were not likely to need more critical care. Also, the proportion of death among the two groups was similar.

Ewen Harrison, the lead study author said in a statement, that NSAIDs are, indeed, safe among Covid patients.

"We now have clear evidence that NSAIDs are safe to use in patients with covid-19, Harrison said. "[It] should provide reassurance to both clinicians and patients that they can continue to be used in the same way as before the pandemic began."

However, it is noteworthy that the bulk of NSAIDs used was U.K. ibuprofen. Thus, the applicability of the study for other nations is blurred, Agence France-Presse (AFP) reported.

When Does Ibuprofen Become Harmful?

Contrary to previous claims about ibuprofen, The National Health Service or NHS said that over-the-counter painkillers such as ibuprofen and paracetamol are safe if usage is proper.

Furthermore, the NHS says that prolonged usage of ibuprofen poses a higher risk in your stomach, kidneys, and heart. The said drug is commonly used in inflammatory pain. It even adds that ibuprofen is more effective in treating injury-related pain than Paracetamol or Aspirin.

The Lancet study above, however, did not mention ibuprofen dosage length in the Covid patients, AFP said. It also did not mention if the study participants were experiencing any chronic disease.