"Fortnite" has teased players with a cryptic message, but a lot has decoded it to be a collaboration with "Mistborn," a popular fantasy novel series by Brandon Sanderson, which has confirmed its soon arrival. Initially, the leaks about the skin suggest that it would be Kelsier, a popular lead character in the novel series, soon bringing mayhem to the battle royale. 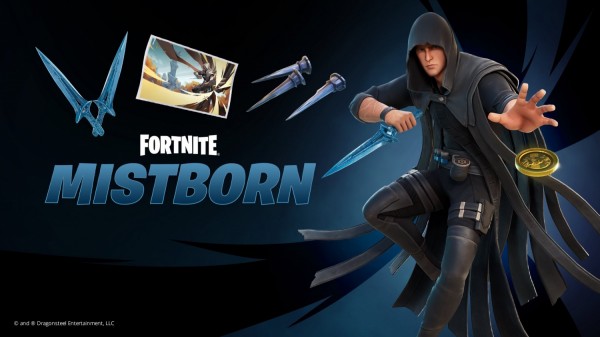 Battle Royale meets fantasy is not a new thing in "Fortnite," as it had already collaborated with massive titles like Marvel, DC, "Ghostbusters," "TRON: Legacy," and other fantasy-genre titles. However, this is the first time that the game will be featuring something from an epic fantasy novel, especially from something as massive as "Mistborn."

Epic Games has established itself to be one of the top collaborators, as "Fortnite" will soon debut another crossover with a popular name, after recently teasing its "Cross Over" with the NBA. What is great about these crossovers is that they can effectively entice different fanbases, including those outside of "Fortnite" to join the battle royale, and bring new content.

Read Also: 'Fortnite' Batman Zero Point: How to Get Skin, Code for Wing Glider to Complete The Dark Knight's Look

It was initially teased by "Fortnite" via their official Twitter account (@FortniteGame) that collaboration is coming soon, and it would focus on the cryptic message that pertains to "Mistborn."

Upon decoding the text image, players have guessed that it would be with the popular fantasy novel series, with its questions reaching the author.

Fortunately, someone like Brandon Sanderson is active on his social media and has immediately addressed the collaboration of "Mistborn" with "Fortnite" via Reddit's r/brandonsanderson subreddit.

Here, the author said that Kelsier would be the main focus of "Fortnite's" new skin which would release soon, bringing "Mistborn" into the game.

Additionally, Sanderson revealed that this was possible because he is a friend of Donald Mustard, otherwise known as the Director of "Fortnite," which paved the way for the collaboration to happen. Both have initially worked together for another game project, known as the smash-hit game from Epic Games, "Infinity Blade."

As revealed by Sanderson, Kelsier would be the skin that would have a digital adaptation on "Fortnite," straight from the pages of the massive novel series of "Mistborn." Apart from that, popular gamer and leaker "Ali-A" has revealed via Twitter (@OMGitsAliA) the first look of what Kelsier's skin would look like in the game.

Reply using code “ALIA” in the store for a video shout-out! 🙏🏻 pic.twitter.com/kl0As8wkBI


This has given a new breath to the novel series's main characters, especially as he joins the battle royale including several of his preferred weapon, buildings, and wallpaper.

However, this release is not yet official, meaning that this may or may not be the final output that Epic Games would release, once they unveil the collaboration.