Apple Search Ads' debut in China is likely to add up to the $11 billion ad revenue forecast come 2025. 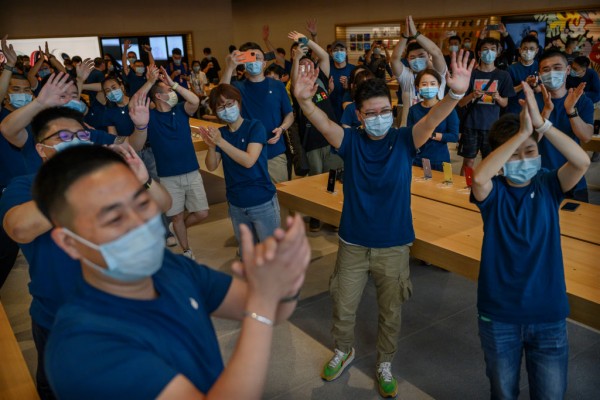 (Photo : by Kevin Frayer/Getty Images)
BEIJING, CHINA - JULY 17: Apple staff welcome customers as they enter in small groups at the official opening of the new Apple Store in the Sanlitun shopping area on July 17, 2020 in Beijing, China. The new store replaces Apple's first ever China store which opened in 2008 prior to the Beijing Olympics adjacent to the new location. Chinas economy returned to growth in the second quarter of 2020, after historic declines in the first quarter due to the coronavirus pandemic. According to figures released by the government Thursday, the gross domestic product grew 3.2% in the quarter from a year ago, reversing a 6.8% contraction in the first part of the year as the country battled the outbreak.

The Cupertino company has recently been ramping up the profitability of advertising services as it recently mass-recruited for the platform. The recent move was clouded by controversy after one of its hire had been called out for his misogynistic views.

Overall, the app marketplace of Apple is likely to produce a whopping $1 Trillion in 2023, a recent study showed.

TechSpot reported that the iPhone maker posted a $643 billion revenue in 2020 alone.

On November 15, 2019, JPMorgan predicted that Apple to produce an $11 billion revenue in 2025, Reuters reported. The firm attributed the forecast to the then-recent launch of Apple TV+.

It also mentioned that the Cupertino giant could capitalize on the growth of App Store queries. Back then, the move of Apple's Search Ads in China was still unheard of.

Now, the latest revenue stream from China is set to be on top of the income forecast.

The Apple Search Ads launched as a beta on June 9, 2016, with the vision to make discovering apps more convenient.

According to Tech Crunch, Apple Search Ads allow developers to buy advertising slots based solely on keywords that users search frequently in the Apple app marketplace. The method of bidding for a slot is similar to Google search ads.

With that, users will be able to see relevant ads on the search results of the apps that they are looking for.

AppInChina first reported that advertisers in China now have the Apple Search Ads features in a slightly restricted version.

The Chinese outlet added that businesses are required to apply for state approval and licenses to opt-in. For instance, gaming apps will have to accomplish a "Value-Added Telecommunications Business License."

To note, the fresh feature is only available for companies fully owned by a Chinese citizen.

The latest requirements are also likely to be the next standard in publishing apps in the Apple ecosystem, at least for mainland China. So, the development is in preparation for the change.

The Chinese counterpart of the App Store has been a primary source of income for the Cupertino giant, TechCrunch claimed in the same report.

Meanwhile, the decline of Huawei has also been in favor of Apple. With that, the iPhone maker saw a sharp increase in its smartphone shipment.

Related Article: Apple Clarifies That Downloading Apps Outside the App Store Is Dangerous - Here's Why