Humpty Dumpty Nursery Rhyme: The SHOCKING Truth Unfolds on TikTok — is He an Egg?

The Humpty Dumpty Nursery Rhyme is one of the countless nursery rhymes that got stuck to the minds of some as it was taught to us when we were younger. 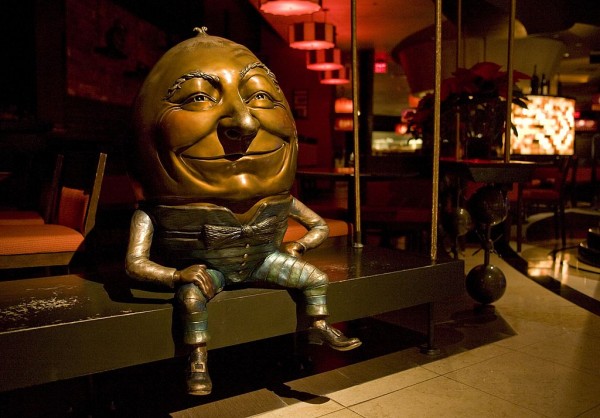 (Photo : by George Rose/Getty Images)
LAS VEGAS, NV - 2010: A metal sculpture of Humpty Dumpty sitting on a bench at David Burke Restaurant in the Venetian Hotel and Casino is seen in this 2009 Las Vegas, Nevada, photo.

However, a woman on TikTok unmasked the darker and tragic truth behind the song that we were singing back when we were just innocent kids. It turns out that what we thought was a child-friendly fantasy fairy tale is actually an unfortunate event in the real world.

It is not the first time that a TikTok user revealed some surprising information. The video-sharing platform has been flooded with similar content.

For instance, another user took the spotlight after she exposed how "Minesweeper" is played correctly.

TikTok user/comedian Mackenzie Barmen, who goes by the username @mackenziebarmen, is fond of creating content that tackles both nursery rhymes and fairy tales, as per Lad Bible.

Barmen did not miss the popular Humpty Dumpty, which most young minds have stumbled upon once in their childhood.

The nursery rhyme is short and simple like most of its counterparts. It stars an anthropomorphic egg above a random brick wall, who was about to fall off its edge.

The TikToker sang the nursery rhyme with such pride and joy like how children used to sing it. However, she then asked her singing self, pretending to be another person: "Do you have any idea what you're singing about?"

She further replied to herself, saying what most people thought Humpty Dumpty was: an egg that shattered into pieces after falling from the edge of the wall.

Read Also: TikTok 'Hello My Name Is Suzie' Trend Is NOT Filter, But A Sticker: Here's How You Can Pull It Off

The caption of the TikTok videos that garnered a whopping 1.6 million likes informed the users that the rhyme was actually about Richard III, the King of England and Lord of Ireland during the 1400s. He then died in 1485, which concluded his reign.

As per Your Tango, the video revealed that the "Wall" is not a brick structure, it was supposed to be a metaphor for the horse of the fallen king.

Richard III accidentally fell from his horse as he was battling, which ended him up severely injured and there was no point in saving him.

As such, that incident made him "the last king to die in battle," Barmen said.

The TikTok star has also gained fame for breaking the truths behind other nursery rhymes, including Jack and Jill, which was apparently about King Louis XVI who was beheaded, thus he "lost his crown," as well as Marie Antoinette.

Elsewhere, here's how the algorithm of TikTok coincidentally detected a user's ADHD. It turns out that a 23-year-old woman only considered having the medical condition due to the app video recommendation.

Related Article: Fake COVID Test Result? Students Share a Hack To Be Excused From Their Schools on TikTok; How to Detect False-Positive Results?