Lightning Strike Hits Three People While Taking A Selfie; But What Are the Odds Of Getting Hit, Really?

A lightning strike is not a fun thing to experience firsthand. And yet, three people were just at the wrong place and the wrong time. They even got a photo of it, too.

A story of three siblings made the headlines recently when they managed to capture a selfie at the exact moment of getting hit by a lightning strike. According to IFLScience, the three didn't suffer from any major injuries. All they had were a few burns but also, quite possibly, the moment of a lifetime. This was the selfie they captured:

Wow. Isobel Jobson's photo as they are struck by lightning. pic.twitter.com/3u01sBqq7C

If you get struck by lightning, it's considered a two-way street. One, it can be incredibly devastating. The three aforementioned siblings were extremely lucky to suffer from minor injuries because other lightning strike victims aren't so fortunate. According to the National Weather Service data, the US averages around 43 deaths from lightning strikes every year.

But then again, just what are the odds of getting struck by lightning in your lifetime, let alone capturing a photo of the moment it hits? The answers may surprise you.

Read also: Researchers Have Found A Way To Generate Lightning - With Rockets

Getting hit by a lightning strike is a pretty rare occurrence, but technically not impossible. If for some not-so-wise reason, you decide to improve your chances, all you have to do is be the highest object in the surroundings. It can also be as easy as carrying a selfie stick, as one lightning strike victim found out. 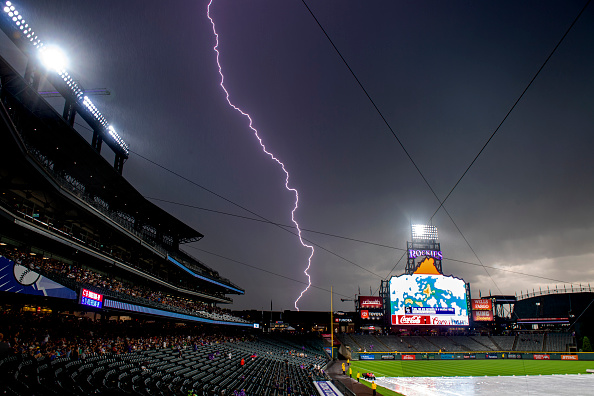 (Photo : Julio Aguilar/Getty Images)
DENVER, CO - JULY 13: Lightning strikes behind Coors Field during a rain delay before a baseball game between the Cincinnati Reds and the Colorado Rockies on July 13, 2019 in Denver, Colorado.

In fact, there are a lot of other situations much more likely to happen than you getting struck by lightning. Stacker compiled some of the unlikeliest occurrences that can happen to you, and a lot of them are quite interesting. For instance, you're more likely to win an Olympic Gold medal (1 in 662,000), having identical twin children (1 in 260), or even winning a prize in Powerball (1 in 25) than get struck by lightning.

Does It Really Not Strike the Same Place Twice? And What About Photo/Video?

There's an old saying that goes, "lightning doesn't strike the same place twice." But you should know that this is nothing more than a myth, according to National Geographic. A lightning strike does happen to hit the same place twice a lot, if that spot is the highest point in the environment. Think of the lightning rod atop a skyscraper, and you'll get a good idea.

So, the final verdict: getting hit by lightning is rare but not impossible. So you'd best be on your guard still.

New Research Explains Why Lightning Is Very Rare On Mars

Man Carrying Selfie Stick In Storm Gets Struck By Lightning

Researchers Have Found A Way To Generate Lightning - With Rockets