All-Time Best Memory Cards For Nintendo Switch: How to Change Your SD Card and How to Transfer Downloaded Games to it

Nintendo Switch memory cards have faced some issues in the past. Some players said that the console maker should issue a "fixed" SD card for the Switch.

Over the previous years, the preference for established internal storage still varies from one player to another.

The impending arrival of the newest console, Nintendo Switch OLED, could spark some doubt about the improvement of the memory cards in the long run. Since it is a "slight upgrade" of the original Switch, the SD cards for this gaming device could require bigger storage.

In 2017, the then-upcoming Switch game, "Dragon Quest Heroes" had drawn criticisms from many users. The issue behind this game is its ridiculous space of 32 GB, yet the players could only occupy 26 GB of its storage.

So much for that, let's now dive into a shortlist of the best memory cards for Nintendo Switch.

SanDisk microSDXC, a Perfect Card For Everyone 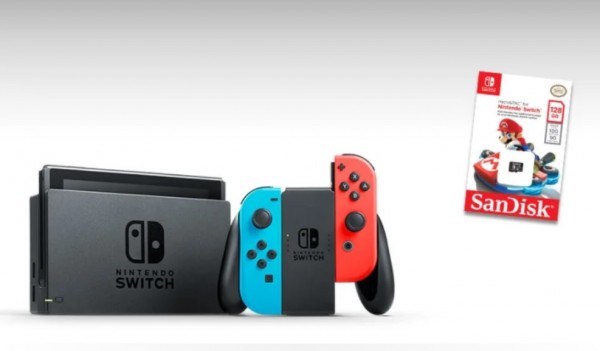 (Photo : Nintendo)
Here are the best memory cards for your Nintendo Switch.

According to a report by Kotaku on Monday, July 19, Nintendo has given a green light for the SanDisk SD card to be the most recommended memory card for Switch.

Even if it's quite expensive, its impressive memory processing could reach up to 100 Mbps in speed.

The comparison can easily be drawn with Ryzen AMD, which lets the computer boot faster than a traditional OS. Currently, you can buy this on Amazon for $25 from its previous price of $35 for the 128 GB variant.

If you want more space in your Nintendo Switch, you can purchase the much larger 256 GB type.

While SanDisk's SD card is dubbed as the best memory card in Nintendo Switch, Mixza Tohaoll's micro SD card is one of the most affordable chips that you can purchase.

If you want larger space for your console, you could root for the 128 GB and 256 GB variants, which are priced at $20 and $35, respectively, here at Amazon.

Read Also: Nintendo Switch Problems and How To Fix Them: From Disconnected JoyCons to Short Battery Life

Upon the upcoming launch of Nintendo Switch a few years ago, The Verge reported that the Lexar Play microSDXC features terabyte-sized variations of the chips.

1 TB is too big for the Switch, yet, if you want to avoid the hassle of buying games and replacing SD cards often, here's the biggest deal that you should go for.

How to Change Your Memory Card in Nintendo Switch

If you want to start changing your Switch's card, you need to first assure that the device is safely turned off. For three seconds, hold the power button when your console is already undocked. After that, you can proceed to shut it down by choosing "power options" and "turn off."

In the kickstand, you can spot a tiny space located at the bottom. That's where you can put the memory card for your device.

How to Transfer Games to Memory Card in Nintendo Switch

The process is easy for this part.

Begin by opening the system settings. Go to data management after. Later, you can now select "move data between systems."

From there, there are two choices that you can make: the first is to transfer files from the SD card to your device, and vice versa. You can then now start transferring games by selecting them.

Remember that you cannot move the saved data here, but you can create a backup by opening the Nintendo Switch Online in the data management menu. Look for the option with "save data cloud." Then, enable "automatic save-data backup."

Related Article: Nintendo Switch SD Cards Will Be More Expensive Than Normal Ones: Will Gamers Be Forced To Buy Them?