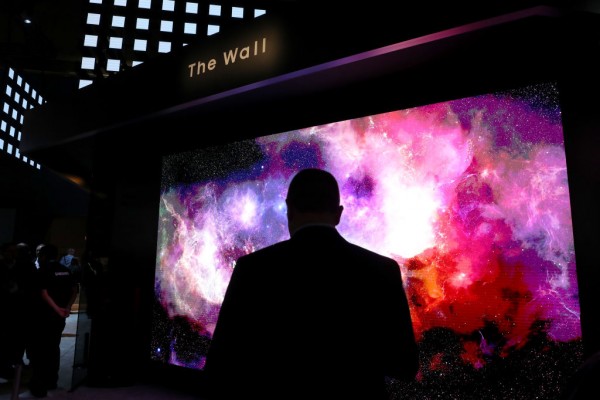 (Photo : by Justin Sullivan/Getty Images)
LAS VEGAS, NEVADA - JANUARY 08: An attendee looks at the Samsung The Wall: MicroLED Display at the Samsung booth during CES 2019 at the Las Vegas Convention Center on January 8, 2019 in Las Vegas, Nevada. CES, the world's largest annual consumer technology trade show, runs through January 11 and features about 4,500 exhibitors showing off their latest products and services to more than 180,000 attendees.

Samsung made the show-off display available to a much larger scale this time around.

Meanwhile, Samsung pre-sold another 110-inch MicroLED TV in South Korea on December 10, 2020. The tech titan further noted that the impressive device will be available to the global market in the first quarter of 2021.

It is worth noting that the first version of Samsung's massive MicroLED TV debuted as "The Wall 219" on November 15, 2019.

Back then, it was already an impressive large-sized display at 219 inches, but it is still far away from the latest iteration of The Wall.

Now, The Wall, a giant 1,000-inch MicroLED TV has been released worldwide, but the price list seems to be hidden by Samsung from the public. The South Korean giant said that the next-generation device, which was recently launched globally, is both brighter and more colorful than the 110-inch version.

As per TechRadar, the reason why The Wall stood out from other TVs lies with the use of MicroLED display technology for the colossal 1,000 inches screen. The said LED tech mimics an OLED TV in terms of giving better black levels.

As for the installation of the massive display, there are tons of options. It could be mounted to a wall, hung from the ceiling, or even placed in an L shape. Plus, there are options to arrange it in either a concave or convex way.

The Verge reported that the promotional images of the MicroLED TV exhibited the massive display in a retail space. That said, it is no doubt that the product is clearly meant for business or commercial use.

However, given that the precise price of the product was not disclosed by Samsung when it was publicly released, it would be hard for the potential market to set a proper budget for it.

So, how much is it going to be worth by estimate?

It is important to note that the 110-inch version of The Wall sold to the tune of $156,000. As such, expect this 1,000-inch monster to sell at a steeper price than its smaller sibling.