Olympic games basketball kicked off recently to a shocker: heavy gold medal favorites Team USA losing to France in their first game. But of course, Tech Times isn't a sports site--it's a tech site. And it's a particular halftime show during that game that's gotten the tech-savvy internet talking. 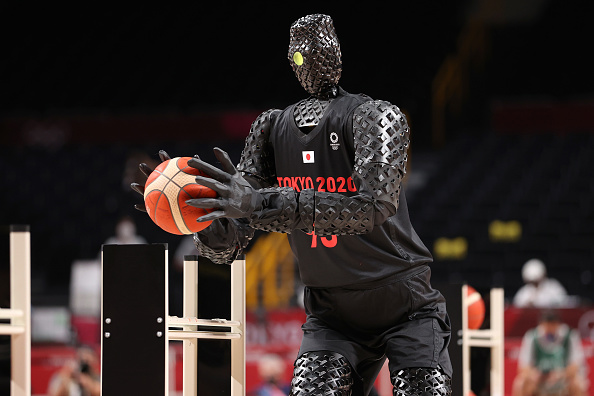 (Photo : Gregory Shamus/Getty Images)
SAITAMA, JAPAN - JULY 25: A robot plays basketball during halftime of the Men's Preliminary Round Group B game between the United States and France on day two of the Tokyo 2020 Olympic Games at Saitama Super Arena on July 25, 2021 in Saitama, Japan.

The show featured Japan's three-point shooting robot CUE, which USAToday reports never missed a single shot during its shootaround, including one from half-court. Here's a Twitter clip of it doing just that:

A basketball robot. For your pleasure. pic.twitter.com/5LZF2vpwNg

CUE shot one free throw from 15 feet out, then a regulation 3-point shot at the center, and finally, a half-court shot from about 45 feet away from the basket. It nailed all three shots, and as NBC Sports puts it, Team USA probably could've used its mechanical shooting skills to defeat the French team.

Technology-wise, however, the basketball robot seems pretty impressive. It's likely now one of the many machines that have been programmed to efficiently do human things, like the AI robot Eva which can respond to human expressions.

Read also: This Robot Modifies its Body Based on a Particular Terrain - Shape-Shifting from Grass to Concrete is Possible!

Olympic Games Basketball Robot: Who Made It?

The basketball robot is the product of Toyota and is basically as tall as a professional player at almost 7 feet. According to Business Insider, the machine uses an array of sensors on its body to map its shots out depending on its distance from the basket. It then adjusts its hands accordingly to try lining up the so-called "perfect shot."

Its engineers were initially pretty proud to announce that their bot's shooting percentage can outmatch that of one of the world's best players: Stephen Curry of the Golden State Warriors. Curry is considered among the best 3-point shooters ever to play the game.

CUE's creators were so confident that before the Olympic Games came into town, they pitted the bot against two professional players from Alvark Tokyo, a team in the Japanese B. League. Here is a video of the contest, which the robot won (and it's not even close):

But while CUE can shoot better than some professional basketball players at the Olympic Games, it still has a lot of severe handicaps when it comes to playing.

For one, it can't really keep up with the athletes themselves. The robot does run on a set of wheels under its feet, but its movement patterns aren't as quick as that of an elite athlete. Thus, it will get left behind on defense. Secondly, it takes a really long time to set its shot up (15 seconds, to be exact), according to the official Toyota dev diary. With a shot that slow, anybody tall enough and able to jump high enough can easily block CUE's shot, rendering it useless on the court.

But will future, more improved versions of the robot be actually able to replace a human athlete? Not likely. That's because humanoid bots do not have the excellent dexterity and fine motor control of the human body, at least not yet. For now, machines like CUE must settle for things as simple as shooting a basketball or picking up and carrying bottles.

This Robot Modifies its Body Based on a Particular Terrain - Shape-Shifting from Grass to Concrete is Possible!