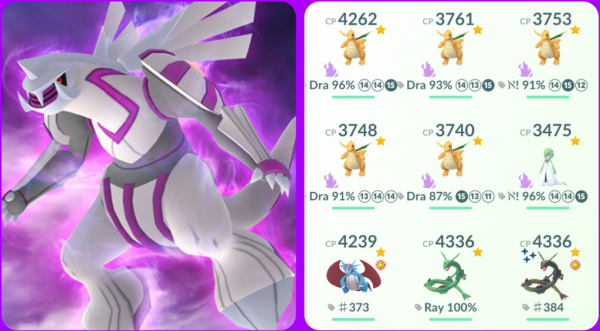 I will boost you with my Charizard, invite me. XD
All I have 🔥🔥

Just like the recent "Pokemon GO" events, the new Ultra Unlock: Space also offers new enhancements. However, it would only focus on two features. These are specifically the arrival of the new Shiny Palkia, a dragon-type pocket monster, and new Regionals.

Niantic confirmed that trainers across the globe will have the chance to encounter new characters that are normally excluded from specific regions. The giant game publisher announced that these pocket monsters will be available in raids and even in the wild.

On the other hand, Pokemon GO Hub provided all the things you need to know about the new event of the well-known adventure title of Niantic:

According to Bleeding Cool's latest report, "Pokemon GO" fans will surely be excited about the new Ultra Unlock Space event since they will encounter the new Shiny Unown U. Aside from these characters, they would also see Espurr and Elgyem, which Niantic already released. 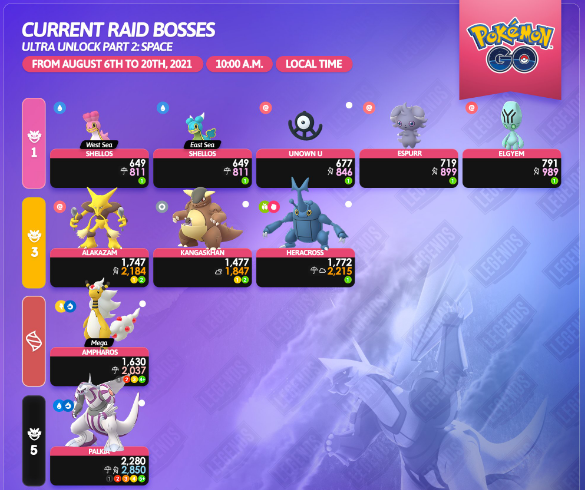 On the other hand, the open-world's West Sea Shellos and East Sea Shellos would be the main focus of the so-called Spotlight Hours. When it comes to raids, the new Ultra Unlock: Space event of Niantic will offer four types of these in-game activities:

Aside from these, the event also has its own Field Research content. However, some game critics claim that this new event-exclusive update is not really exciting. But, some players might still find it interesting. If you want to complete the new Field Research tasks, here are the prices you can acquire:

already done for part 2 of the #UltraUnlock event in #PokemonGO, as I caught my shiny female Heracross AND shiny Palkia this morning! 🤩✨ #shinyHeracross #shinyPalkia #shinyPokemon @PokemonGoApp pic.twitter.com/pFPYthwlNS

If you want to acquire the new Shiny Palkia before the latest "Pokemon GO" Ultra Unlock: Space Event ends, then you need to focus on completing five-star raids.

However, completing one five-star raid will not guarantee you the new character since it is a legendary dragon and water-type pocket monster.

But, with enough effort and skills, you might be lucky enough to get this monster. Once you acquire the new Shiny Palkia, you will have a character with 215 defense, 189 stamina, 280 attacks, and 4515 max CP.

For more news updates about "Pokemon GO" and its upcoming in-game events, always keep your tabs open here at TechTimes.

Related Article: 'Pokemon Sword and Shield' Shiny: Which Pokemon Can Switch Players Select at The End of 'Dynamax Adventures?'