China is taking WeChat and Tencent to court after the "youth mode'' feature of the popular messaging platform in the Asian country was accused of breaking the child safety laws. 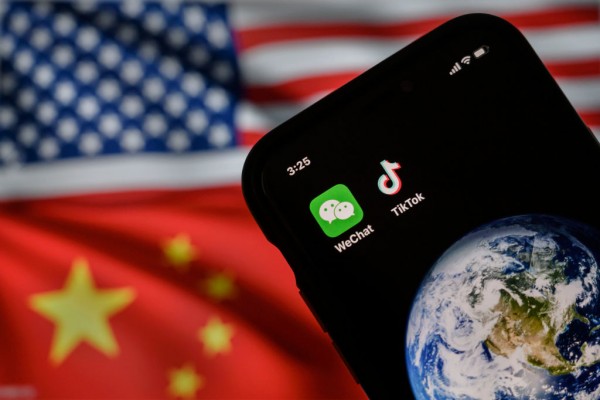 (Photo : by Kevin Frayer/Getty Images))
BEIJING, CHINA - SEPTEMBER 22: In this photo illustration, a mobile phone can be seen displaying the logos for Chinese apps WeChat and TikTok in front of a monitor showing the flags of the United States and China on an internet page, on September 22, 2020 in Beijing, China.

As per Engadget, the Chinese government is still clamping down on WeChat even if it is part of the digital life of their citizens.

Previously, on March 23, China banned the lite version of WeChat and Alipay for allegedly extracting excessive amounts of data from their users, saying that both tech giants have crossed the line.

This time around, the Chinese government, through Beijing prosecutors, is going after the subsidiary of Tencent.

Reuters reported that Beijing prosecutors from the Haidian District People's Procuratorate filed a case against the Shenzhen Tencent Computer Systems Co Ltd, which the website of the top prosecutor in the country, JCRB.com, posted.

The prosecutors are bringing Tencent to court after they claim that the "youth mode" of WeChat goes against the law made to protect the welfare of Chinese minors.

However, it is worth noting that the document revealing the lawsuit did not share any details as to how the "youth mode" feature of WeChat broke the existing Chinese law. However, it said that it is meant to help other agencies and organizations who may want to sue Tencent as well.

The document further noted that interested parties may contact the office of the prosecutor 30 days after it has been published.

The youth mode of the "super app" is more of a parenting tool that helps them control the WeChat usage of their children.

The feature further prevents young ages from using the features of the social messaging platform, such as making a payment, looking for friends who are nearby, and playing some gaming tiles.

On Aug. 3, the Chinese state-controlled media under Xinhua, the official news agency of the Asian country, went on to criticize video games and their effects on the youth, likening them to an addictive drug.

The state-controlled outlet further put the blame on Tencent, which reigns as the top company in the gaming industry in the country, for the worsening gaming addiction in the region.

Tencent is the tech giant behind the game "Honor of King," which is popularly played by the students in China. The sought-after MOBA game is inspired by the gameplay of "League of Legends."

As such, Tencent limited the gaming time of minors on the "Honor of Kings" to 90 minutes a day on non-holidays and up to 3 hours to 2 hours at a minimum on special occasions.