Over the past twelve and a half years, the crypto industry has become very user-friendly and filled with opportunities. At least, that's the case when compared with its initial, raw state. However, just because it is easier than it used to be, that still doesn't make it necessarily easy or intuitive. The industry is certainly working towards becoming a lot more intuitive, but the fact is that it is still not simple enough for absolutely everybody to understand and easily find their way around.

It still lacks regulations, it is still extremely volatile, which is both good and bad, as it offers opportunities, but only to those who know what to expect and how to behave. On top of that, its trading platforms and exchanges are still rather basic, at least when compared to their traditional finance counterparts.

Of course, there are many who have seen this issue and are working towards making the crypto industry not only as intuitive as traditional finance, but better, more accessible, more inclusive, and, according to some plans, fully automated. In fact, this is what the crypto project Zort is trying to achieve.

Zort is a project that combines the crypto industry with advanced AI algorithms to carry out trades on users' behalf. Until now, users had to spend hundreds, if not thousands of hours studying crypto, the market, different coins, mechanisms, strategies, price histories, new developments, and more, in order to be able to call themselves experts and become successful traders who don't just rely on luck to make a profit.

Zort offers a way around that by allowing users to simply deposit some money, make a few decisions, and then wait for the profits to start coming in. Basically, it trades on users' behalf, not requiring them to do anything other than be that to collect the prizes.

However, that is only scratching the surface of what Zort does, and a lot of other things available on the platform have to do with its native cryptocurrency, the ZORT coin which has recently been listed on Kucoin and will be listed on five more top exchanges soon, making it easier for potential new investor to start trading with Zort. 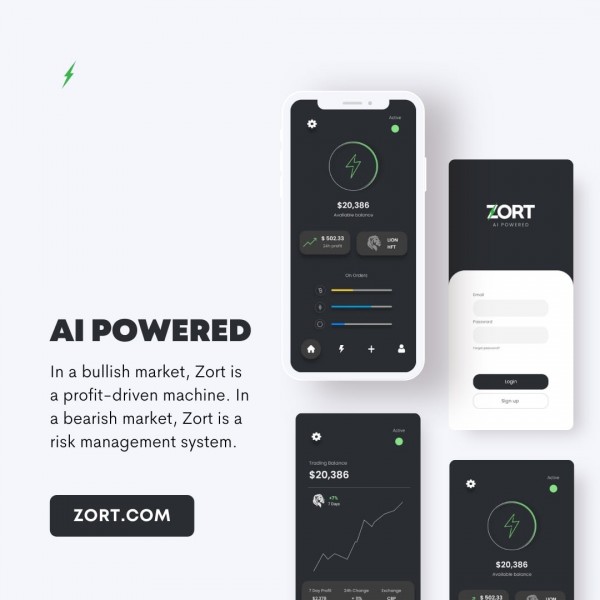 As mentioned, ZORT is the project's native coin, and it is used for rewarding both holders and traders. Essentially, it is tokenizing its proprietary technology on the Ethereum network. At first glance, ZORT may seem like just another cryptocurrency that can be bought, sold, or received. However, there is much more than that to the coin, which comes with a number of very desirable benefits.

For example, if users stake ZORT coins, they will soon discover that their trading fees within the Zort ecosystem are reduced by 50%. This is a special benefit that is only available for ZORT stakers. Of course, that implies that staking is also supported, which also means that anyone who stakes ZORT will receive rewards for keeping the coin locked up, thus reducing the circulating supply and helping the token preserve (or increase) its value.

Staking ZORT yields a 15% annual earning, and the best part is that users do not even need to lock it in order to benefit. This is a great advantage over other staking protocols of the DeFi sector, which do require users to lock up their coins for a specific period of time, and some even have penalties for those who unstake their coins before that period has run out.

ZORT doesn't do any of that, and so users are completely free to use it however they see fit. However, it does pay to keep it in the wallet, not only because of the rewards but also because of trading fees. Zort ecosystem trades on behalf of the trader, and that means that it will use any opportunity that emerges. Since there are likely to be many smaller ones, there will likely also be many trades, each of which comes with a fee. Having those fees cut in half will reduce the cost of trading significantly, and more money will be left for the user once they decide to cash out.