Playmobil's Star Trek USS Enterprise replica marks the first retail product of the toy company of the phenomenal franchise, and it's now open for pre-order, but more on that later. 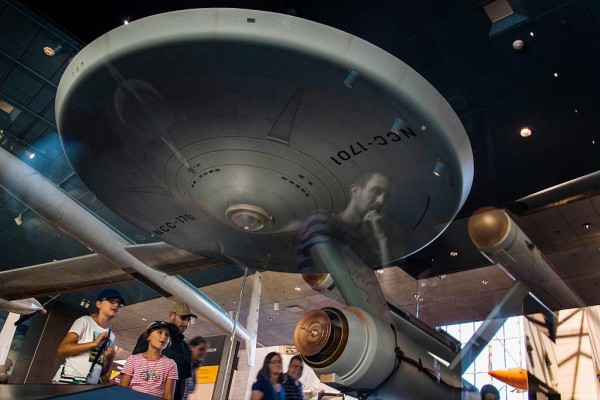 (Photo : by JIM WATSON/AFP via Getty Images)
The original model of the starship U.S.S. Enterprise from the television series "Star Trek" is on display at the Smithsonian Air and Space Museum in Washington, DC, September 12, 2016.

As per Den of Geek, the latest replica of the USS Enterprise from Star Trek only shows that the sci-fi spaceship still remains as an iconic part of pop culture globally.

As such, a toymaker still makes retail products based on the franchise even as the television series turned multimedia venture is already celebrating its 55th anniversary.

The toy company touted that its first attempt on the Star Trek franchise sports "authentic details" paired with a mount that flaunts a special design.

On top of that, the replica of the Star Trek USS Enterprise comes with an augmented reality app that could take the experience to the next level.

The Star Trek toy set is composed of not just the USS Enterprise replica. It is joined by miniatures of the entire bridge crew, such as Kirk, Spock, and the rest of the group composed of the seven crew members from the original cast.

If the owner of the sci-fi spaceship replica decides to play with it, the roof of the vessel is detachable. That said, the USS Enterprise replica can fit in the whole crew inside their exact places in the spacecraft, just like how they appeared in the series.

The iconic sci-fi spaceship replica features tons of lights and sounds based on the original series and the show dialogue. Both can be controlled via a smartphone through an AR app, making it convenient to operate.

It is to note that Playmobil is known for including illumination and sound effects in their miniature-scaled toys, which feature assets and characters from classic film and tv franchises.

The toy company also released toys based on Back to the Future and Ghostbusters, specifically replicas of the DeLorean and Ecto-1, respectively.

According to SlashGear, the product listing of the spaceship replica noted that players could interact with all of the crew members via the AR app by using the augmented reality technology. Not to mention that it also allows users to recreate scenes from the actual tv series, but they can also create their own stories.

Powering the toy is a removable dilithium core that can be charged via a USB-C connector. The core is placed in the engineering room of the USS Enterprise, and removing it will trigger an alarm.

The order page of the Star Trek spacecraft replica with an AR app is now live with a whopping price of $499.99. Click this link to head on to the pre-order listing of the item on Amazon.