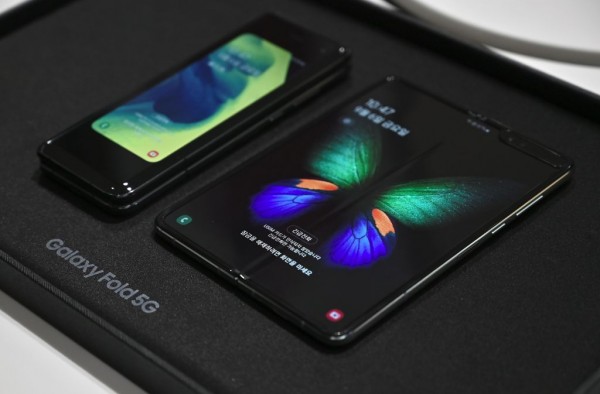 (Photo : by JUNG YEON-JE/AFP via Getty Images)
A Samsung Galaxy Fold smartphone is displayed at a showroom in Seoul on September 6, 2019. - Tech giant Samsung launched its hotly anticipated first foldable smartphone on September 6, months after faulty screens forced an embarrassing delay of its release.

It is important to point out the Galaxy Z Fold 3, the latest flagship foldable of Samsung, carries a screen that is approximately double the size of traditional handheld devices due to its folding mechanism.

As such, the massive screen could hog more power from the smartphone battery, which is nearly the same size as what you see in a regular mobile phone, or 4400mAh to be exact, according to 9to5Google.

After unveiling the next-gen foldable smartphone last Aug. 11, Samsung highlighted the display tech that debuted on the Galaxy Z Fold 3 that goes by the moniker "Eco OLED" or "Eco 2 OLED."

The new screen tech on the Z Fold 3 is the brainchild of the Samsung Display, which is meant to significantly lower the power consumption of the massive display when compared to the older OLED panels.

On top of that, Samsung further noted that the Eco Square OLED is also suited to the "growing demand for low-power devices in the 5G era."

It is to note that 5G hogs more energy than other connectivity such as 4G and WiFi. That said, lowering the power consumption of other components would be suited as devices transition to next-gen telecommunication.

As per Samsung's tests, the power consumption of the Eco Square OLED panel has been reduced to a significant amount of 25% than the conventional display tech counterpart.

XDA Developers reported that Samsung lessens the power needed to light up the OLED display by removing the need for a polarizer layer, an opaque plastic film sandwich between the glass cover and the OLED panel.

It further helps block out external lights from the display to maintain a bright picture despite other light sources.

However, the polarizer layers also eat up some of the light that the OLED panel emits. As such, it becomes dimmer than actual, thus the need to brighten it up more. But doing so requires more energy from the battery.

On the other hand, the Eco OLED does not require any additional layer other than the glass cover, which is a Samsung UTG in this case, and the OLED panel itself.

In turn, the Eco OLED emits its actual brightness performance, which is 33% higher than the one with a polarizer.

That said, the power consumption is also reduced.

Samsung has yet to announce the other devices that will soon sport the Eco Square OLED as well. In the meantime, it is currently available on the Galaxy Z Fold 3 exclusively.