Samsung Galaxy Note 21 is confirmed to be absent in the Galaxy Unpacked event on August 11.

The company will be introducing its upcoming devices, such as the Galaxy S21 FE, the Galaxy Watch 4 Series, the Galaxy Z Fold 3, and the Galaxy Flip 3, during the forthcoming affair. 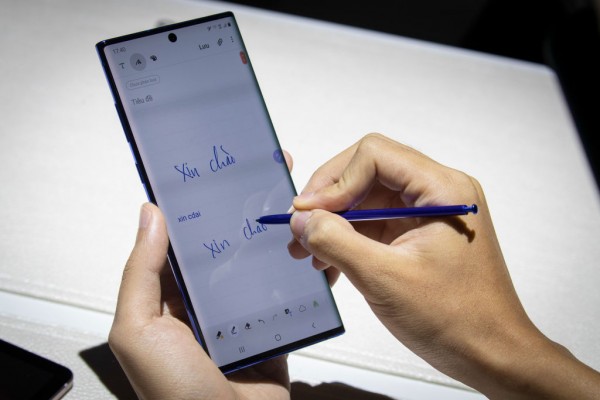 (Photo : by Drew Angerer/Getty Images)
NEW YORK, NY - AUGUST 7: A man uses the stylus on the new Samsung Galaxy Note 10 smartphone during a launch event at Barclays Center on August 7, 2019 in the Brooklyn borough of New York City. Samsung announced the Galaxy Note 10 and Galaxy Note 10 Plus smartphones, which go on sale August 23 starting at $949.

As early as December 20, 2020, rumors have been spreading that the next Galaxy Note 21 has been canceled, raising speculations that the Galaxy S21 will instead flaunt the S Pen Stylus, which the Note lineup exclusively carried.

Meanwhile, an FCC listing suggested that the Samsung Galaxy Z Fold 3 graced the list of devices that will support the upcoming S Pen Pro Stylus.

As per 9to5Google, Samsung first hinted way back on March 16 that the Note series "might" skip 2021, citing the current chip shortage that tech companies are still grappling with. But the previous announcement did not put an end to the possibility of the premium smartphone lineup releasing this year.

However, this time around, Samsung seemed to have decided to forget about the Note lineup for 2021, saying that it would not be debuting "this time around."

It is to note that such a statement still suggests that the said series is not completely buried. That said, fans of the lineup can still possibly get another iteration of the devices in the coming years.

Nevertheless, no one really knows until the South Korean conglomerate issues a concrete revelation. Also, the development would perhaps depend on the situation of the prevailing chip supply.

Samsung Galaxy Fold 3 as a Replacement

So, now that Samsung established that Galaxy Note 21 is skipping this year's Unpacked event, does the company have plans for the fans of the series?

The South Korean titan confirmed that the Note features will instead be carried by its other devices. But it is important to note that Samsung did not confirm which of its devices are getting the exclusive functions of the premium lineup.

The company just went on to invite folks out there to tune in to their upcoming launch event on August 11.

Nevertheless, XDA-Developers reported that Samsung already confirmed that the company is introducing the first S Pen meant for foldable phones. That said, the Galaxy Fold 3 is likely serving as the substitute for the absence of the Note series in 2021.

Aside from the rumored S Pen Stylus, the next-gen foldable flagship of Samsung was teased to introduce new features that focus on innovative "ways of working connecting and creating."

Meanwhile, the South Korean giant hinted that the next Z Flip is sporting a more durable design, which will be featuring "stronger materials."

Related Article: Samsung Galaxy S21 Ultra 100x Zoom Trick: Capturing HD Moon Photo Without Tripod-- How to Do It in Other Phones