Hero Collector, one of the largest pop culture hubs and creator of collectibles, has announced its first wave of collectibles from the hit video game franchise Fallout - the first release in its partnership with Bethesda.

The upcoming Fallout merch marks the first time Hero Collector - a company owned by Eaglemoss Publishing and known for its partworks collections featuring popular comics, film, and TV properties like Marvel superheroes and Star Trek - created a line of collectibles based on a video game property. Hero Collector and Bethesda Softworks, developer of the Fallout franchise, last 2020. 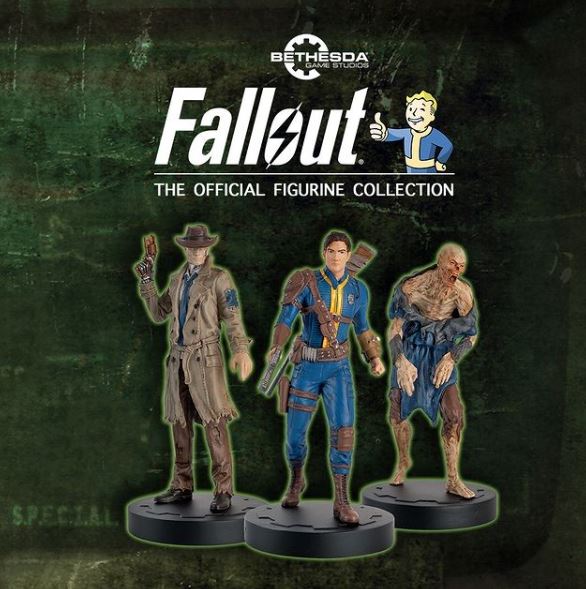 Each of the items is about 12 cm tall, following a 1:16 figure scale. Each item will be hand-painted and shipped out in a window box for collectors who prefer to keep their items in the box. Hero Collector is expected to start shipping the figures sometime in November 2021, with each expected to retail for $24.99 each.

Hero Collector also appeared to draw straight from the game itself, which is why the iconic series' mascot, Vault Boy, was not yet included. However, Hero Collector said in a statement that fans will see more from the company, including the reveal of more figures from the world of Fallout.

While there has been no official release from either Bethesda or Hero Collectors, the Rockville, Maryland-based game development company owns a range of classic IP such as Skyrim, Prey, and Wolfenstein, which creates endless possibilities for new merch down the line.

Preorders for the Fallout collectibles are available directly from the Eaglemoss website.

Hero Collector is a pop culture hub specializing in various merchandise, including books, graphic novels, figurines, statues and statuettes, and models - with designs inspired by pop culture icons such as Marvel, DC, Star Trek, Doctor Who, and the Wizarding World.

First founded by entrepreneur and software developer Christopher Weaver in 1986, Bethesda started as a division of Media Technology Limited before becoming a ZeniMax Media subsidiary in 1999. It started going independently as Bethesda Game Studio in 2001.

It started working on the Fallout franchise in 2007 after acquiring the property from Interplay Entertainment. Its first title under Bethesda, Fallout 3, was released in 2008 and followed by five downloadable content (DLC) packs after its release. Since then, it has spawned Fallout 4 (2015), as well as the spin-off games Fallout: New Vegas (2010) and Fallout 76 (2018).