Windows 11 is still in beta mode and Microsoft has been using the opportunity to test new features and see how the beta users, known as Windows Insiders, react to them.

Another Windows app is set to get a much needed redesign and it is none other than the good ol' Paint app.

The changes to the Paint app will be its first major update Microsoft has given in years and will include a dark mode and a new command bar. 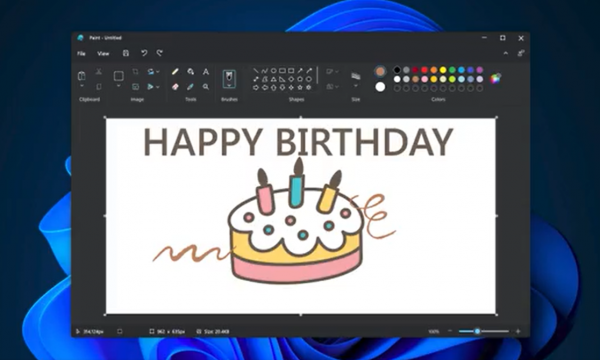 Windows 11, at least as far as beta is concerned, is getting a redesigned Paint app. This is according to the tech company's head of Windows and devices, Panos Panay. Panay uploaded a teaser video on his Twitter account.

"Here's another Windows 11 first look. This is the beautifully redesigned Paint app, coming soon to Windows Insiders," the tweet reads.

This means that the Paint app will be the latest addition to the list of Windows 11 updated apps that beta users can try.

According to The Verge, the teaser video uploaded by Panay shows improvements made with the app's font picker and brushes. It also shows that the Windows Paint app will now have a dark mode.

A quick picker for tools will show the available brushes as well as their effects, while the font tool will include size, alignment, and other options users can change.

Windows 11 is bringing a lot of changes with it and it's inevitable that one or more will not sit well with beta users. It appears that example of it is the change Microsoft has made to how default apps work.

According to Digital Trends, "if you don't select the 'Always use this app' box when opening a new app for the first time, Microsoft will never change the default."

"Default apps have to be set by file or link type instead of a single switch that can be toggled," the report adds.

That means that you can no longer set default apps via the Start Menu like you have been doing on Windows 10.

According to the report, beta users are unhappy with this new change to Windows 11 default apps. A complaint that was posted on the Windows Insider feedback hub has more than 600 upvotes as of writing.

Other Windows 11 Apps That Have Received Updates

Microsoft has already rolled out updates for a number of Windows 11 apps. These Windows 11 apps include the Snipping Tool, Calculator, Mail, and Calendar.

Based on other reports, apps such as Photos can also expect updates in Windows II. An app from Windows 95, PowerToys, is expected to make a return in Windows 11.

Windows 11: Here's How You Can Set Default Apps in Settings and File Types

Windows 11 Update: Microsoft Apps are Getting Upgrades Including Paint, Photos, PowerToys, and MORE