A space object that Chinese astronomers have been studying in the last few years may be the new arm of the Milky Way galaxy.

The possible new arm of the galaxy has been nicknamed "Cattail" and has not yet been fully mapped. Cattail was spotted by astronomers using the Five-hundred-meter Aperture Spherical Radio Telescope, which is otherwise known as FAST.

A space object that Chinese astronomers have found may be a previously known arm of the Milky Way galaxy, according to Space.

The arm has since been called Cattail and is described by the Space report as a "filament of gas and dust hanging at the outer edge of our galaxy."

According to Keping Qiu, an astronomer at Nanjing University in China, he and his colleagues noticed "clouds of hydrogen gas" while studying a sky region known as Cygnus-X, which is around 4,500 light-years away from Earth.

Qiu and his colleagues were using a radio telescope known as Five-hundred-meter Aperture Spherical Radio Telescope (FAST). FAST is considered to be the largest radio telescope in the world.

The Chinese researchers then combined the findings of FAST with those from telescopes located in Germany and Australia in order to map out the feature, which is estimated to be around 68,000 light-years away.

What is Known About Cattail

According to the report by Space, Cattail "is at the outer edge of the Milky Way, located around three times farther from the galactic center than we are."

Cattail stretches across 3,600 light-years and may even be larger than what researchers currently think. It also has a mass of as much as 65,000 suns.

The Cattail does not follow the same warped pattern that the Milky Way galaxy has at the edges. There is also a possibility that the Cattail may simply just be another part of the galaxy that was never noticed prior.

The Milky Way Galaxy and Its Arms 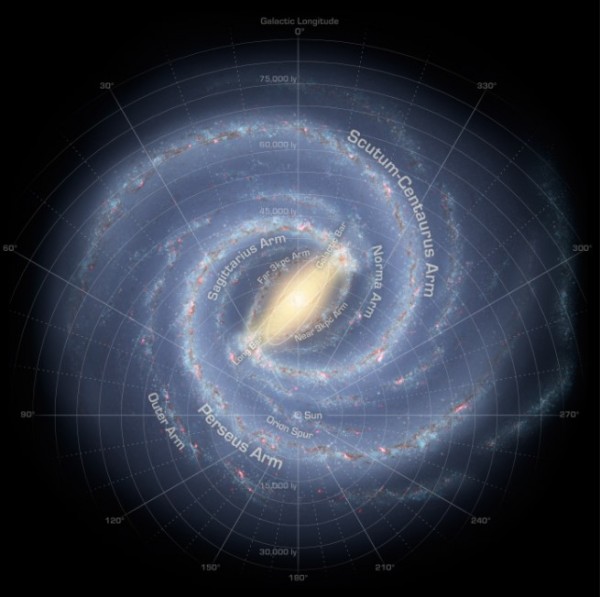 Should the Cattail really be a new arm of the Milky Way, it will be its fifth known arm.

According to Space, the Milky Way galaxy "is a giant spiral galaxy, which has a central bulge surrounded by coiling arms containing stars, gas, and dust." It currently has four known arms.

According to the National Aeronautics and Space Administration (NASA), "the major arms consist of the highest densities of both young and old stars; the minor arms are primarily filled with gas and pockets of star-forming activity."

Also Read: IN PHOTOS: The Different Galaxies the Hubble Space Telescope Has Taken Photos of in the Last 3 Decades

The Milky Way Is Still Growing, And It Is Growing Faster Than The Speed Of Sound