An artificial intelligence-based neural network developed by a group of researchers from Israel has the capacity to make photorealistic edits to photos.

The only thing the user has to do to make such edits possible is to simply input the description of the edit that they want to be done.

The researchers went as far as to demonstrate the AI-based generative adversarial networks they came up with to make photorealistic edits to Elon Musk and Mark Zuckerberg's photos.

An AI-based neural network that makes use of generative adversarial networks has been developed by a group of researchers from Israel.

The researchers from Israel have since published the study, which is titled "StyleCLIP: Text-Driven Manipulation of StyleGAN Imagery."

The title of the study itself already gives you an idea of how this particular technology works. According to a report by Futurism, the only thing that users have to do to make photorealistic edits to a photo is to input what changes they want to be made.

The first page of the study already gives visual examples of the before and after images that showcase the technology. For example, a photo of Barack Obama was edited to give the former president a mohawk hairstyle by simply typing "mohawk hairstyle."

Another example shown in the study is that by typing "without makeup," a photo of Taylor Swift was edited to remove all makeup.

The AI-based technology is not limited to photos of people. An example of this is by inputting the words "Gothic church," a photo of a church was edited to look like an example of a church that can be classified under Gothic architecture."

Interesting choice of test subject in this AI paper:https://t.co/bfSonqaGxz pic.twitter.com/5aE5NMdUi5

A photo of Elon Musk has been edited by researchers multiple times to show the Tesla CEO sporting different hairstyles and, in one photo, even makeup. The Elon Musk makeovers have been shared on Twitter by Scott Manley.

"Interesting choice of subject in this AI paper," the tweet reads.

The photorealistically edited photos of Elon Musk show the Tesla CEO sporting fringe hair, bob cut, curly hair, and straight hair. The edits are not limited to Elon Musk's hairstyles. Other photos show him with tanned skin, looking pale, and with makeup.

Mark Zuckerberg Gets a Makeover 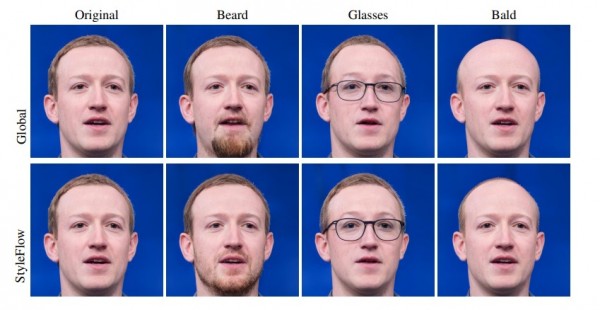 Elon Musk is not the only CEO to get a makeover courtesy of the researchers who came up with the AI-based neural network. Even Facebook CEO Mark Zuckerberg got a makeover of his own.

The report by Futurism shows the different edits made to a photo of Mark Zuckerberg, including edits that gave him a beard, put glasses on his face, and even made him bald.

Google 'Quick, Draw!' Game Shows The Power Of Neural Networks: AI Can Guess What You Doodle