Fans can remember that at the start of Fornite Chapter Season 7, a mysterious alien army has invaded the Island after a series of weird occurrences - radio signals, crop circles, and weird lights in the sky. Not much is known about the extraterrestrial invaders aside from being called "The Last Reality." Doctor Slone took the initiative to command the Imagined Order (IO) and fight back.

Now that the latest Fortnite season is coming to a close, the Alien Mothership has set its sights on the IO secret base, located at the Island's Corny Complex - but Slone has a plan to stop the Invasion once and for all. After receiving and responding to her calls all throughout Season 7 and working as undercover agents for the IO, players are now ready to infiltrate The Last Reality and stop the alien occupation for good. 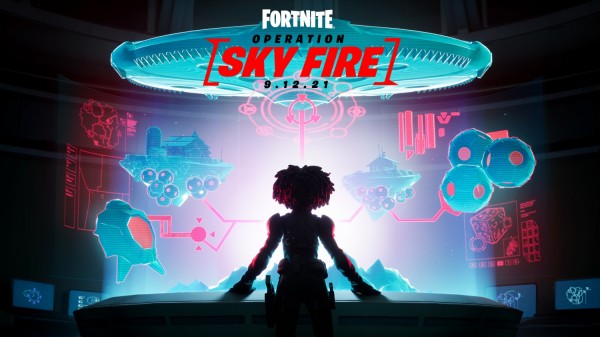 ALSO READ: Ariana Grande is the Next Superstar to Join Fortnite, Will Headline the Rift Tour Event [OFFICIAL]

Play "Operation: Sky Fire" For a Limited Time Only

As the latest Fortnite season ends, "Operation: Sky Fire" is the fitting conclusion available to all players as a free, one-time event that players definitely won't want to miss. Furthermore, the event will not be available after this limited-time window and no replays will be available. Content creators and players who want to remember the event must make sure to set up their streams and game records appropriately.

Everyone can play in the event with a full lobby of 16 friends. The live event will start 30 minutes before the game so players must reserve their spots to join. To start, players must gather and spend their Bars for this season's Bargain Bin Wild Week on September 9, 10 AM ET.

Also, before "Operation: Sky Fire" starts, complete any remaining Epic Quests, Superman Quests, and make sure to trade Battle Stars in-game. Similarly, any remaining Alien Artifacts should be collected and exchanged for Kymera styles and options.

Any unclaimed Alien Artifacts or Battle Stars by the end of Chapter 2 Season 7 will be automatically exchanged for styles and rewards starting with the earliest available items. So if players are saving up for a particular item, they should start redeeming soon.

Fortnite is an online video game developed by Epic Games first released in 2017. The game allows three different experiences for its players through the different game mode versions - all built from the same engine and shares similar gameplay mechanics.

In Fortnite: Save The World, up to four players can play cooperatively in the hybrid tower-building, defense-shooter, survival game where they defend objects with traps and build fortifications to help them ward off hordes of zombie-like creatures. In Fortnite Battle Royale, up to 100 players fight to be the last person standing, building fortifications, and collecting loots as the map continuously shrinks. Lastly, Fortnite Creative is the sandbox version of the game, giving players complete freedom in spawning and creating everything on the Island.

Ariana Grande is the Next Superstar to Join Fortnite, Will Headline the Rift Tour Event [OFFICIAL]