The nucleus refers to the control center of the cell. The common notion when hearing this biological term is how it contains DNA.

We often visualize it as strands that have unique characteristics.

Recently, researchers discovered something interesting about the arrangement of DNA in the cells. Through the novel-imaging device, they have studied the mechanical forces in the muscle nuclei. 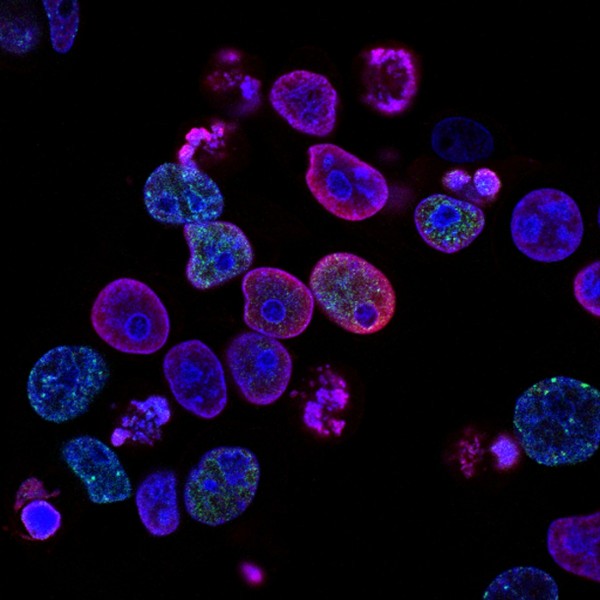 (Photo : National Cancer Institute from Unsplash)
A group of researchers developed a novel-imaging device that can see the DNA arrangements and the behavior of chromatin in the cell nuclei.

According to a report by Phys.org on Monday, Sept. 6, a group of scientists from the Weizmann Institute of Science conducted the study. The researchers came from the Biological Physics and Molecular Genetics Department.

Led by Prof. Talila Volk and Prof. Sam Safran, the study emerged when the former spotted important evidence about the gene expression patterns.

Volk said that they have tried using a novel imaging method for chemically preserved cells. This instance has overlooked a significant process that is going on inside cell nuclei.

Dr. Dana Lorber, who is under Volk's team, has developed a novel imaging device that could observe the behavior of fruit fly larva's muscle nuclei.

Under the fluorescence microscope, the movement of the subject was scanned while the device held a translucent larva. The insect's muscle movement was observed during the period.

In addition, the device has also helped scientists to see a spatial arrangement of DNA and its chromatin (its protein) in the muscle nuclei.

What the Scientists Found Out

Dr. Daria Amiad-Pavlov, another member of Volk's group together with Lorber has observed the arrangement of long chromatic molecules.

The scientists witnessed how the chromatic gets separated from the nucleus liquid, the same way that happens in oil and water when mixed.

Later, they concluded that the DNA has a surprising nature: its organized arrangement in the muscle nuclei.

They thought it was a mistake at first, but after another round of trial, the findings were correct.

In another test, Dr. Francesco Roncat, another scientist who collaborated with Amiad-Pavlov and Lorber, carried out the experiment with live human white blood cells.

The researchers found out that the former process is a "general phenomenon." The arrangement of DNA has something to do with evolution.

To know more about the study entitled "Mesoscale phase separation of chromatin in the nucleus," visit eLife.

In 2014, Tech Times reported a special discovery made by the Swedish scientists about nuclei. They found out that a 180-year-old fern fossil has still intact chromosomes and nuclei.

A year later, another group of researchers made use of a cryo-electron microscope to study the pores of the cell nucleus. University of Zurich biochemists witnessed the formation of a molecular gate during the study.