"Call of Duty: Warzone" hackers were seen wearing the unreleased skin of Judge Dredd. It coincidentally surfaced as Activision seemingly hinted at a better anti-cheat feature during the "Call of Duty: Vanguard" teaser. 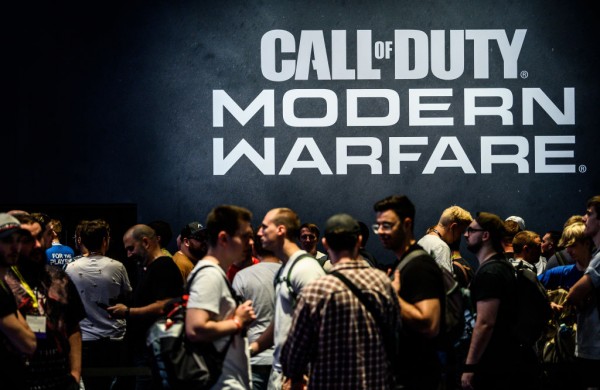 (Photo : by Lukas Schulze/Getty Images)
COLOGNE, GERMANY - AUGUST 20: Visitors wait to try out the latest version of Call of Duty Modern Warfare during the press day at the 2019 Gamescom gaming trade fair on August 20, 2019 in Cologne, Germany. Gamescom 2019, the biggest video gaming trade fair in the world, will be open to the public from August 21-24.

As per GameRant, another incident further proves that "Call of Duty: Warzone" has a hacking problem, which unlocked an unreleased skin to some hackers.

It is worth noting that it is not the first time that hackers from "Call of Duty: Warzone" had an early unofficial access to the character outfits in the game.

For instance, CharlieIntel reported last July 1 that some players of "Modern Warfare" were seen wearing unreleased skin from the Soap Operator bundle in the game.

What's more, other hackers even went on to create their custom skin and wore it while playing the battle royale gaming title.

This time around, "Warzone" hackers are seen once again sporting an unreleased skin, which is set to be released on the Season 5 Reloaded of the "Call of Duty: Warzone."

Although two hackers have already been seen sporting the upcoming Judge Dredd skin, its release date is yet to be unveiled.

A Reddit user that goes by the username Copy_Cod shared some screenshots of the Judge Dred skin worn by a player in-game.

It turned out that the hackers did not only flaunt the default look of the unreleased Judge Dred Skin. They even went on to sport the cel-shaded variant of the character outfit, which carries the grayscale colorway similar to the first comic appearance of Dredd.

That said, the black and white look of the upcoming skin got more attention than other outfits due to its unique colorway.

So, given that the cheater was wearing a special version of the Judge Dred skin, it sure does suggest that the hacker was able to unlock the whole upcoming bundle.

Not just that, the two hackers that sported the unreleased outfits also showed off their kill count, wiping 80 players in total.

Meanwhile, as per MSN, the latest teaser of the upcoming release of the "Call of Duty: Vanguard" included a quick Easter Egg that seems to hint at a working anti-cheat system in the game.

Players have been looking forward to it due to the prevailing hack problem in the popular battle royale.

YouTuber JGOD noticed and posted on Twitter that the trailer of "Vanguard" included the word BAN on the hammer that the Operator swung.

Didnt see this the 1st time I watched the trailer pic.twitter.com/5zK674FN6i