Chevrolet Bolt EV has faced a stop production of its electric vehicles, as GM faces massive scrutiny over its stocks of the battery and chips, as shortage still plagues most industries today. However, Chevy Bolt is also known to have faced issues with its charging and battery, which were initially subject to a recall and have a long waiting time.

GM has a lot of electric vehicles on its upcoming lineup, from the Cadillac Lyriq to the Hummer EV and more, which has gotten the attention and excitement of the public for its release.

However, the shortage of chips and disputes on the safety of its batteries have made GM take a step back during these times as it has to deal with problems now. 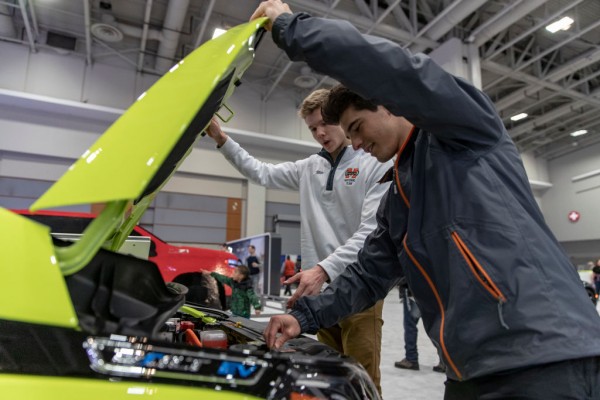 (Photo : Alex Edelman/Getty Images)
WASHINGTON, DC - APRIL 05: Show attendees examine the battery compartment of a 2019 Chevy Bolt electric vehicle on display at the Washington Auto Show at the Walter E. Washington Convention Center on April 5, 2019 in Washington, DC. Designated one of the nations top auto shows it runs from April 5 through April 14, 2019.

GM has been reported that it would be stopping the Chevrolet Bolt EV production until mid-October, and that time would not even be sure as the company would soon update when it comes. Bloomberg first caught wind of this, and its problem with LG's batteries and suppliers of chips has resulted in this unprecedented halt.

Instead of the plant shutdown only lasting until September 20 it would be apparent until October 11, or the mid-week of the upcoming month. GM would take this time to secure more chips and to configure its battery problems which have made a rift over their company and LG's battery production team that made them lose confidence in its quality.

According to Tech Crunch, GM is facing a massive production problem on its end, hence the plant shutdown and scrutiny it has with its suppliers. The halt would affect the sales of the Chevy Bolt EV, particularly as it is one of the most popular budget electric vehicles in the market, available for people to purchase.

Last August, GM has also announced the supposed recall of the Chevy Bolt EV for its batteries which are said to have an incident of catching fire or overheating when charging or in use. The company has released several fire safety procedures with regards to the charging and use of the Chevy Bolt EV to avoid any unwanted happenings.

It was said that there were several cases of fire and dangers brought by the Chevy Bolt EV, and while the company has issued a recall, not all vehicles can be accommodated. For that, users would have to wait and ensure that they are following the right EV charging protocols that were released by GM and Chevrolet.

Now, there are two major problems that the Chevrolet Bolt faces: one is the recall which needs to be done immediately for customers that have bought the electric vehicle with faulty batteries. The second is that of the stop production on plants and the electric vehicle.

This would hold GM back a lot of its goals, especially in terms of sales or revenue.