NASA's Bill Nelson said that the Blue Origin lawsuit against the United States space agency could likely delay the moon landing mission from its target launch in 2024. 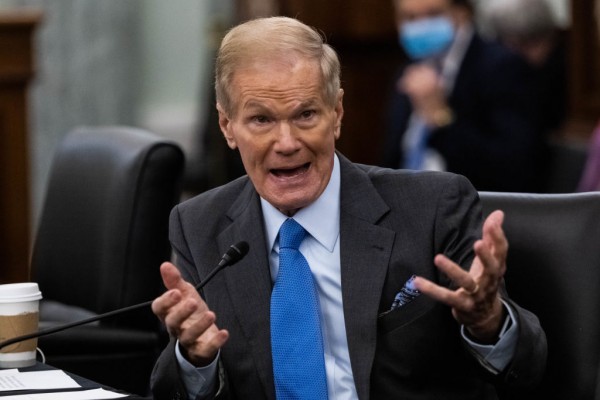 (Photo : by Graeme Jennings-Pool/Getty Images)
WASHINGTON, DC - APRIL 21: Former US Senator Bill Nelson, nominee to be administrator of NASA, testifies during a Senate Commerce, Science, and Transportation Committee nomination hearing on April 21, 2021 in Washington, DC. Nelson was a senator representing Florida from 2001-2019.

The moon landing mission of NASA is under the Artemis program, which seeks to bring back astronauts to the surface of the moon at least by 2024, following the previous achievement of the Apollo crew, Space.com reported.

However, the lunar landing mission has been facing a couple of hiccups along the way.

It includes the spacesuits issue, the raging wrath of COVID-19, and even the latest litigation brought upon by the protest of Blue Origin.

The space firm of billionaire and Amazon founder, Jeff Bezos, brought NASA to the federal court as it protested the latter's decision to award the $2.9 billion lunar lander contract solely to its rival company, Elon Musk's SpaceX.

Blue Origin further claimed that the deal between SpaceX and NASA was "unfair."

The lawsuit that Bezos' space exploration firm filed on the federal court was even too large in file size that it kept crashing the computers of the US Department of Justice.

So, instead of using PDFs, the files were placed in classic DVDs--just to refrain from creating an additional delay in the litigation.

As such, NASA, or National Aeronautics and Space Administration administrator, Nelson, said in a press conference that they are no longer certain if the space agency could land back humans to the moon by 2024, as per Business Insider.

Nelson answered a question from an Associated Press reporter, Marcia Dunn, asking about meeting the 2024 moon landing schedule in November that year.

The NASA official answered to the press, saying "you want to call the federal judge and ask him?"

He went on to admit that they already don't know.

Business Insider said in the same report that the space agency confirmed that Nelson was talking about the lawsuit of Blue Origin during the question and answer.

It is to note that the NASA administrator said from his previous pronouncements last Aug. 24 at the 36th Space Symposium that the space agency is not backing down despite such delays.

During his speech at the annual event, Nelson already noted that the delays were brought upon by litigations. But the NASA official did not specify which lawsuit he was talking about back then.

However, despite the difficulties that the ambitious 2024 lunar lander schedule is facing, the Artemis project will continue.

The NASA top official went on to declare that "we can do hard things. We are can-do people."