ISS Food Is Not All Bland, Says French Astronaut; But How Exactly Is Food Packed For Outer Space?

ISS astronaut Thomas Pesquet, who is the current commander of the space station, recently shared a video on Twitter of him showcasing some space food:

In the video, he showcases several of the food that all ISS astronauts like him have access to while up there. It certainly doesn't look as appetizing for anybody on Earth, but Pesquet says it isn't all bad, reports Digital Trends.

In fact, before Pesquet even went aboard, he even requested some dishes from Michelin-star chef Thierry Marx to bring to outer space, so the ISS crew can have some delicious food to enjoy while working and during breaks. 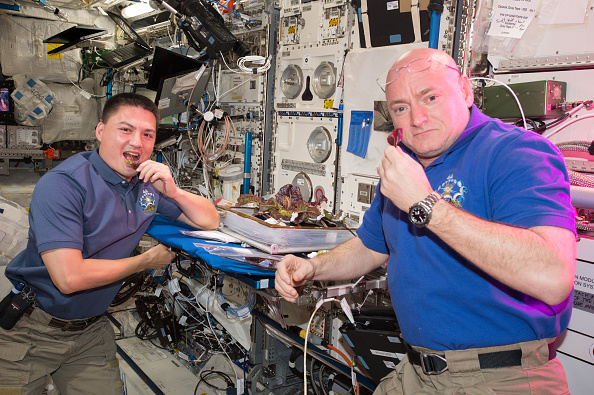 (Photo : NASA via Getty Images)
IN SPACE - AUGUST 10: In this handout photo provided by NASA, NASA astronauts Scott Kelly (R) and Kjell Lindgren are getting their taste buds ready for the first taste of food that's grown, harvested and eaten in space on the International Space Station August 10, 2015 in space. Growing the food is a critical step on the path to Mars.

Marx, being the world-class chef that he is, prepared the dishes to ensure that the health of ISS astronauts won't be compromised. As such, he was very mindful of the fat, sugar, and salt content of the food, further remarking that astronauts on the International Space Station are more or less like high-level athletes.

But it's not just Marx who has had the pleasure of making healthy, delicious food for ISS astronauts. NASA is actually in a long-term partnership with another renowned chef, Alain Ducasse.

This isn't the first time that space food served on the ISS has been in the spotlight. Back in June, astronauts Matthias Maurer and Thomas Marshburn also shared photos of an experiment featuring space food and how people like them eat compared to those on Earth.

Maurer posted the photos on Twitter, which featured images of him getting his blood drawn after eating space food to better allow scientists to see how the human body reacts to space and microgravity as a whole:

In this nutrition experiment, also performed in space, @AstroMarshburn & I had to do several blood draws after a space meal, a fasting period & a high caloric drink so we learn what space travel does to the human body & what we can learn from it for medical progress on Earth 🩺🌍 pic.twitter.com/rFXLsz5gqg

Read Also: NASA Is Trying To Find Ways To Reduce Stress in Plants Grown in Space

How Exactly Is ISS Food Made?

The foremost concern with making space food is preservation. Astronauts on the International Space Station don't exactly have the luxury to just order food and have it delivered to them on a regular basis, because rocket flights aren't cheap.

As such, the station is kept fully stocked with food that was packaged to last a long time. According to the Smithsonian Air And Space Museum, several preservation methods included freeze-drying during the early days of the Apollo missions. Freeze-drying is still a popular method of preserving food for ISS astronauts today.

Also, a lot of the food that astronauts ate back in the day came in tubes full of meat and vegetable puree, which might have contributed to the idea that all space food is bland.

Modern preservation methods are more advanced. As stated by Pesquet in his Twitter video, alongside freeze-dried vegetables and meat, they also often get irradiated stuff like chocolate cakes. It sounds a bit scary to say that, but in reality, all they have to do is put an irradiated food pack in a special oven or rehydrate it with either cold or hot water, then they're good to go.

In the future, though, new ISS astronauts could likely expect space-grown crops as part of the food supply. That's because last year, NASA managed to grow the first radish crop in space, as part of an effort of launching longer-duration missions. 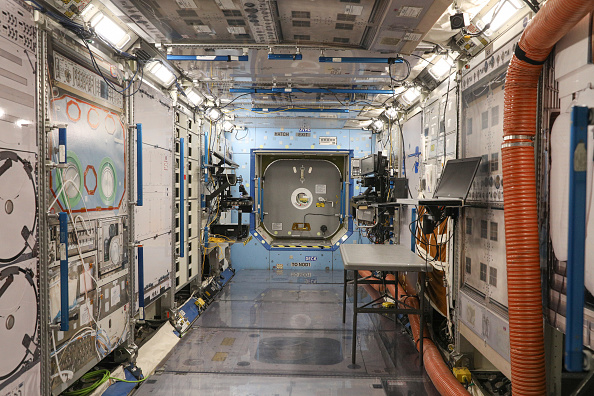 (Photo : Loren Elliott/Getty Images)
HOUSTON, TX - OCTOBER 24: A mockup of the U.S. Destiny Laboratory at the International Space Station is seen inside the Space Vehicle Mockup Facility during a media preview for an upcoming public open house at NASA's Johnson Space Center on October 24, 2018 in Houston, Texas. The public open house will celebrate NASA's 60th anniversary and the International Space Station's 20th anniversary.

Related Article: ISS Astronauts Find NEW CRACKS in the Space Station's Walls: Is It Due To Retire Soon?