WeChat will stop scanning users' photos in the background after a tech influencer from the Chinese social media platform, Weibo, exposed it using the new feature of Apple's iOS 15, the Record App Activity. 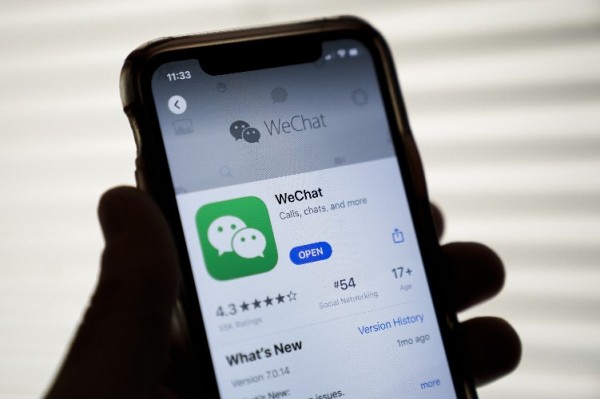 (Photo : Photo Illustration by Drew Angerer/Getty Images)
In this photo illustration, the WeChat app is displayed in the App Store on an Apple iPhone on August 7, 2020 in Washington, DC. On Thursday evening, President Donald Trump signed an executive order that bans any transactions between the parent company of TikTok, ByteDance, and U.S. citizens due to national security reasons. The president signed a separate executive order banning transactions with China-based tech company Tencent, which owns the app WeChat. Both orders are set to take effect in 45 days.

The influencer from Weibo revealed that WeChat is scanning the photos of its users silently, but Apple's Record App Activity was able to catch the behavior, as per the latest report of South China Morning Post.

As such, the China-based super app, WeChat, already vowed to stop constantly scanning the photos of its users in response to the online exposè.

The said messaging platform turned into a super app with vast features, including shopping, payment, and search engine--to name a few.

Not just that, the Tencent-owned app is now "an integral part of daily life in China," according to a survey that ChinaDaily.com reported last Jan. 20.

On average, WeChat has a whopping 1.2 billion daily active users across the globe in 2020. What's more, in 2021, the Chinese app celebrated its 10 years of existence as it was launched way back in January 2011.

Now, the 10-year old app with more than a billion active users promises to remove its photo scanning habit in its next update.

The representative from WeChat said in a statement that the behavior "will be canceled in the new version." So, WeChat users should expect the change to occur once an update starts rolling out.

WeChat further clarified that the app is only scanning the photo galleries or camera rolls of the users who permitted the platform.

The Chinese super-app explained that background scanning is meant to give its users a faster and more seamless experience of sending their photos.

The tech influencer on Weibo that goes by the name "Hacklous" further disclosed that the Tencent-owned platform scans the photo galleries of its users' devices in the background for as long as one minute.

In addition, the tech influencer went on to add that WeChat repeats the behavior "every few hours."

On top of that, Hacklous also exposed on Weibo that WeChat is not the only app that scans photos in the background.

For instance, Taobao, the online shopping app of Alibaba, Taobao, and the QQ messaging app of Tencent allegedly do this behavior as well.

Taobao, QQ, and Alibaba have yet to respond to the revelation of the tech influencer.

Background Photo Scanning: How to Stop

It is worth noting that WeChat's photo scanning behavior will only end in its next update. As such, its current users are still exposed to it.

That said, the tech influencer noted that the only solution to stop apps like WeChat from scanning your private photos is to turn off the permission in the system settings.