SpaceX is set to launch the Crew-3 mission on October 31, and the company has been able to fix an issue with its Crew Dragon capsule in time for it.

That issue involves the Crew Dragon's toilet, which has already been fixed to avoid urine leaks in space. Two previous SpaceX missions had apparently experienced urine leaks without the passengers noticing the problem.

The Crew-3 mission's Crew Dragon capsule, which has been named Endurance, will carry four astronauts to the International Space Station. The astronauts will be staying there for a total of six months. 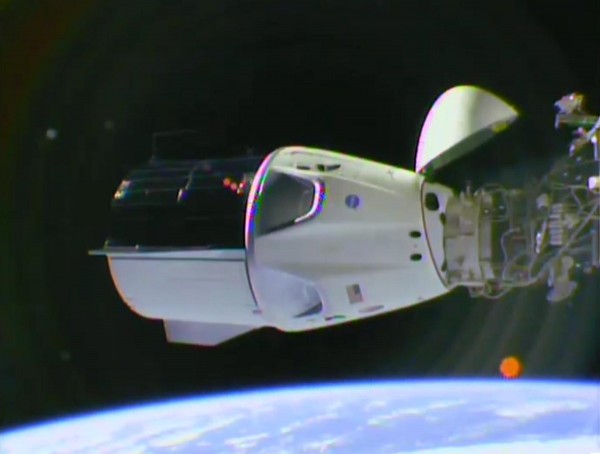 (Photo : NASA)
On the photograph is SpaceX's Crew Dragon docked to the International Space Station. It is set to return home to Earth on Friday, March 8.

SpaceX has managed to fix the Crew Dragon's toilet issue before the launch of the Crew-3 mission this weekend. The fix prevents urine leaks from happening in space.

The Crew-3 crew members are set to be launched in a Crew Dragon capsule that has been named Endurance on October 31.

The toilet fix for the Endurance happened after SpaceX discovered that two other Crew Dragon capsules had urine leak issues, according to a report by Space.

The most recent SpaceX mission, the Inspiration4, had a urine leak problem with its Crew Dragon capsule."Post-landing inspections revealed that a tube hooked up to a toilet storage tank had popped loose during the three-day flight," according to the Space report.

Due to the tube that was eventually unhooked from the tank, urine ended up not going into the fan system instead, per Bill Gerstenmaier, vice president of build and flight reliability at SpaceX, as quoted in the Space report.

Discovering the urine issue during the Inspiration4 flight prompted both SpaceX and the National Aeronautics and Space Administration (NASA) to check the Endeavour, the Crew Dragon flight used by the Crew-2 mission. It was eventually discovered the Endeavour had signs that pointed to a urine leak happening as well.

The urine leaks, according to the Space report, is not a very big issue.

"The two crews who flew aboard those capsules didn't notice the issue during their flights, and analyses suggest that Endeavour didn't suffer corrosion damage that could complicate its return to Earth," said Space.

Despite it, SpaceX wanted to fix the toilet issue to avoid further urine leaks in the future.

Gernstenmaier said that "For Crew-3, we've fixed this problem in the tank by essentially making an all-welded structure with no longer joints in there that can come unglued and become disconnected."

SpaceX is set to launch the Crew-3 mission on October 31 that will bring four astronauts to the International Space Station (ISS). The Crew-3 mission is part of SpaceX's contract with NASA's Commercial Crew Program.

The four members of the mission are NASA astronauts Kayla Barron, Raja Charri, and Tom Marshburn, and European Space Agency (ESA) astronaut Matthias Maurer. The four astronauts will be staying in the ISS for six months.

SpaceX's Crew-3 Mission Launch: How to Watch on Halloween