Tesla, just like any other company, has been suffering from the extreme impact of the global chip shortage on the planet. Apparently, it could not fully address the recent issues from some car owners.

According to the buyers of Model Y and Model 3 who vented out their rants on Reddit, many electric vehicles have missing USB-C ports on the center console. The automaker said that the problem was due to the ongoing semiconductor crisis in response to the complaints. 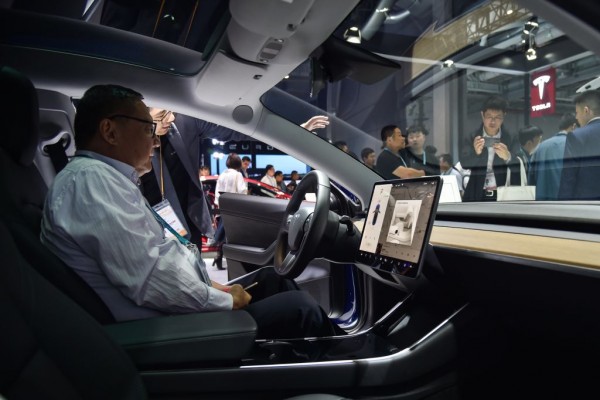 (Photo : HECTOR RETAMAL/AFP via Getty Images)
A man checks out a Tesla model 3 in the Tesla stand during the second China International Import Expo in Shanghai on November 6, 2019

According to a report by Electrek on Friday, Nov. 12, many Tesla car users had noticed that something was wrong with their cars when they got home. They discovered that the phone charger of their vehicles is not working.

While some owners complained about the missing port on the center console, other reports claimed that others were also concerned about the rear-seat USB ports that are nowhere to be found. If these components are absent in an EV, the wireless charging will not be activated.

On Thursday, Nov. 11, the first incident of missing ports was reported. Somehow, not all the delivered Tesla cars have this problem since others are properly working and have complete parts.

Before delivering the cars, Tesla needs to inform the owners about the underlying issue. According to the report, others saw the lacking parts before accepting the delivery. Some owners were bothered by the setback upon testing the Model Y and 3.

Can Tesla Fix This Problem?

In another report by EV Globe, the affected Tesla owners could request a fix about the missing ports. It was mentioned there that someone who purchased the Model Y would arrange an appointment with the company regarding the issue.

Most importantly, there will be no charge for this negotiation since the owner has previously paid for the component.

Going back to Electrek's report, Tesla is only one of many car manufacturers that were hit by the microchip issue. Elon Musk and his company have been dealing with it for many months since the pandemic started.

With this happening, the companies are forced to increase pricing for their cars to catch up with their loss. Earlier this month, Tesla released an updated list for the prices of Model Y and Model 3.

The problem involving the missing USB ports is part of the company's solution to coping up with the scarcity of semiconductors. Moreover, it has also exterminated the lumbar support adjustment for the said models.

For instance, BMW applied the same changes, but it decided to remove the touchscreen functionality from the new models. To make up for the setback, it promised to pay $175 and $500.

This week, the Palo Alto-headquartered company officially included the navigation feature "Waypoints." Following the requests of many Tesla customers for this system, Elon Musk immediately gave what they wanted.

For Tesla's Waypoints, expect more smooth trips through different buttons to click while on a trip.