Why is China so Obsessed With Banning Games? Gaming Crackdown Details Explained

China has been hellbent on combating video game addiction among children reportedly growing "addicted" to internet games. Beijing continues to restrict the time spent on windows by limiting them to just three-hour playtime per week.

Amid the gaming crackdown in the country, it's no wonder that game-centered industries such as Tencent and NetEase persist in expanding. What's the reason behind this contrasting outcome?

Why Does China Dislike Gaming? 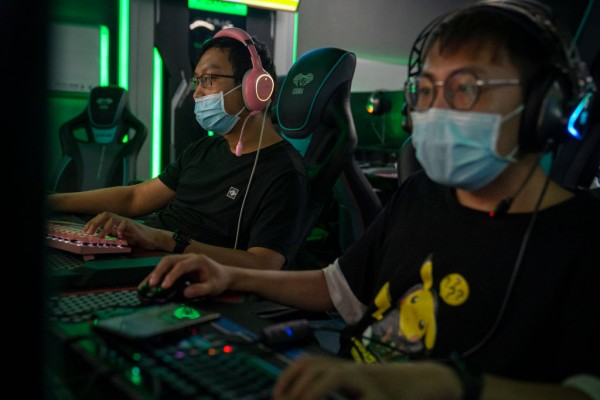 (Photo : Andrea Verdelli/Getty Images)
BEIJING, CHINA - SEPTEMBER 11: People play online video games in a game arcade on September 11, 2021 in Beijing, China. Commencing at the end of August, China has announced strict measures to cut online gaming time for children under 18 years of age to a maximum of three hours a week during designated times, in an attempt to curb addiction

According to a South China Morning Post report, the Chinese government sees video games as something that brings extreme addiction to the people. The state-sponsored media coined the term "spiritual opium" after comparing its effects to an addictive medication back in August.

Of course, that's not the shallow reason why Beijing is invested in limiting screen time for young players. The origin of the term "spiritual opium" could be traced back to 1961 when a Communist Party outlet People's Daily, said that it was worse than real drugs.

Apparently, the media highlighted that game addiction refers to "ideological poisoning. In the following years, many insisted that internet addiction has adverse impacts on people.

In the early 2000s, Marcella Szablewics, specializing in studying Chinese video game culture, wrote that there were "stereotypical depictions" that come out in news media and companies that build up public fear. She noted that in her book entitled "Mapping Digital Game Culture in China."

In the previous news story on Tech Times, in August 2021, authorities strictly considered that players under 18 can only play from 8:00 p.m. to 9:00 p.m. during weekends and holidays. China has quickly updated its previous rule involving the 90-hour daily gameplay three-hour playtime on average holidays.

In hopes of curbing video game addiction in the waning years, there came the point when China also banned the use of gaming consoles. So much for that, Beijing shifted its focus on censorship regarding media content, and this is where video game restrictions are included.

Those video games that depict blood, ghosts, and sensitive parts of the body met an untimely ban at that time. For instance, China did not permit Tencent to monetize its "PUBG Mobile Game." The tech titan only escaped the restriction when it rebranded the game to "Peacekeeper Elite."

Over the past years, China held a nine-month freeze to some game licenses back in 2018. This 2021, the authorities suspended a handful of game approvals that would stop after four months.

The decision of China to extend the gaming ban seems to be half-baked since SCMP indicated in its report that the authorities have realized how important Chinese culture promotion is to the economy.

As such, the role of the Chinese government and game developers comes with one another regarding economic development. Over the past years, many Chinese-themed games emerged in the market, which tells many stories to the fans.

Amid the COVID-19 pandemic, China's revenue from video game businesses hit 278.9 billion yuan last year. This means that the gaming trend in the country is still an integral part of the industry's growth.

From what we have seen so far, Tencent and NetEase are becoming more popular around the world with the release of their top-notch games. The surge of Chinese developers has put China at the zenith of the video game industry.

While China continues to enjoy the limelight in the gaming world, the majority of the issues pointed out its censorship management. For instance, a Steam game was banned following a comparison between Winnie the Pooh and a political figure.

Another example is the in-game chat censorship which also reached the now-popular game "Genshin Impact."

Cloud Providers Are Problematic Over Gaming Ban in China

The Register reported earlier this week that some Chinese cloud providers like Alibaba have been finding ways about their unused capacity.

Per Canalys CEO Steve Brazier, the incident was a result of China's ongoing data privacy regulations in the market. He expects that this set of rules will also reach more countries soon.